Is it Gossip--or Something That Needs to be Said? 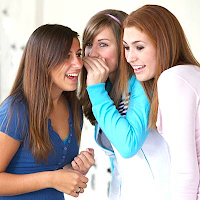 Terry always talked about Roger behind his back. I told Roger, “Terry’s always gossiping about you.” I was shocked when Roger replied, “Terry’s always gossiping about you, too!” It really is true—the person who gossips to you will also gossip about you. And this is why we shouldn’t be friends with anyone who spreads rumors. “He who goes about as a slanderer reveals secrets, therefore do not associate with a gossip” (Prov. 20:19).

But just because you talk about someone doesn’t mean that it’s gossip. You need to talk to and about others when corrections need to be made. Second Timothy 4:2 says to reprove, rebuke, exhort, and instruct. Sometimes it’s necessary to talk about others, but in the right way. Ask yourself these three questions.

1. What’s my motive in sharing this information? Do you want to hurt someone’s reputation? Are you trying to make yourself look better?

Information gets twisted as it’s being passed along. I was once preaching a sermon and asked the congregation, “If you’ve ever heard gossip about yourself and at least part of it wasn’t true, please raise your hand.” The entire congregation raised their hands! I told the church, “Remember this the next time you hear a rumor. It’s probably inaccurate or not even true.”

When tragedies and accidents happen many people ask, “Why would God allow this?” Jesus had an opportunity to clear up these matters—but He didn’t. Two disasters occurred where many people were killed. Pilate ordered some Jewish worshipers to be murdered, and 18 people were accidentally killed when a tower fell on them.

Luke 13:1-5 says, “There were some present who reported to Him about the Galileans whose blood Pilate had mixed with their sacrifices. And Jesus said to them, ‘Do you suppose that these Galileans were greater sinners than all other Galileans because they suffered this fate? I tell you, no.…
Or do you suppose that those eighteen on whom the tower in Siloam fell and killed them were worse culprits than all the men who live in Jerusalem? I tell you, no.’”

Some people assumed they died because God was punishing them for their sins. Jesus corrected this incorrect assumption (“Do you suppose…”) and said those catastrophes didn’t happen because of their sins. Twice He said, “I tell you, no.” God wasn’t to blame for those tragedies.

Some people blame God for not preventing evil and suffering. But remember, Jesus saw evil and suffering every day and never blamed God for it. After all, He was God! He never said, “You’re right. I’m to blame for all these terrible things.” Obviously there’s more going on than meets the eye. Satan and his demons incite people to do evil, and most accidents happen due to natural causes.

Someone has said that discouragement is the devil’s most valuable tool. The Bible calls discouragement “losing heart” (Luke 18:1, 2 Cor. 4:1,16, Gal. 6:9). Discouragement means losing your strength, courage and motivation, which drains your spiritual battery. When you encourage a discouraged person it’s like sending energy into their spirit so they can keep going.

When you jump-start a battery, you pull alongside the vehicle that has a depleted battery. You connect the jumper cables on a car’s good battery to the battery in the other car. When you turn on your car, the power in your battery flows into the other battery to start the other car.

This illustrates how encouragement works. It’s like jump-starting another person. You pull alongside someone who is exhausted or has lost hope. Your encouraging words send energy into them so they can continue down the road. 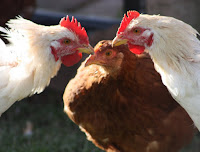 A study was done that found chickens have a pecking order to determine their rank. If you put ten chickens in a pen they will quickly establish an order of dominance from greatest to the least. The most dominant chicken is #1 and pecks on the other nine. It struts around clucking, “I’m the greatest chicken around here!”

The #2 chicken submits to #1’s pecking, but pecks on chickens #3-10. And so on, down to the lowly #10 chicken—who gets picked on and pecked on by the other nine. If they only knew that all chickens are equal and will one day end up at Chick-fil-A or KFC. The pecking order of importance only exists in the chicken’s mind.

Humans also have a pecking order of significance, where some people push others around so they’ll feel more important than the next guy. Even the disciples got caught up in this and argued among themselves over who was the greatest (Luke 9:46). They were trying to establish a pecking order and I’m sure a few of them got their feathers ruffled.

Jesus said, “You know that the rulers of the Gentiles lord it over them, and their great mean exercise authority over them” (Matt. 20:25). But God’s Kingdom is just the opposite. We are not to be like the pagans who brag about themselves and belittle others. Jesus reversed the pecking order and said, “Whoever wishes to become great among you shall be your servant, and whoever wished to be first among you shall be your slave” (20:26-27).