When the Good Guy Loses 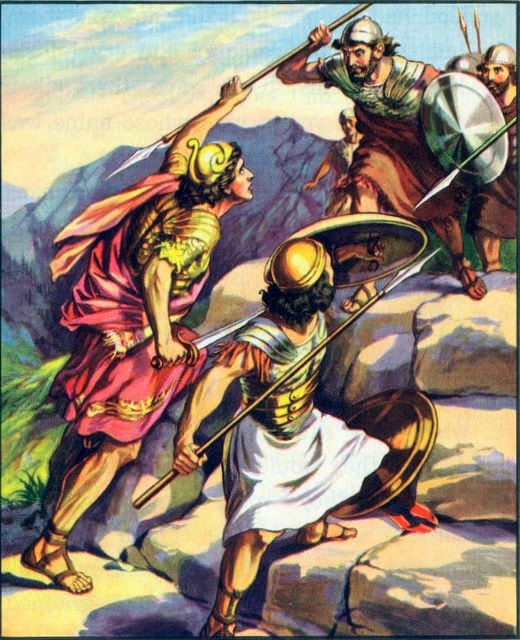 Why do bad things happen to good people? In the Bible sometimes the good guy loses—or at least it appears that way at the moment. You will never lose by following God, even if it looks like failure from a human point of view. Here are 6 examples of the “good guy” losing. Interestingly, all names start with the letter J.

1. Jonathan was David’s best friend and was killed in battle by the bad guys, the Philistines (1 Samuel 31:2). The good guy died. Jonathan was King Saul’s son and was heir to the throne, but his death allowed David to become king.

We tend to think everyone is guaranteed 70 years of life but we aren’t guaranteed the next day (see James 4:13-15). Sometimes innocent people die at young ages and God doesn’t explain why. Jonathan is an example of young man who loved God but died seemingly too soon.

2. John the Baptist was thrown into prison for speaking truth and Herod had him beheaded (Mark 6:27). Speaking God’s truth will sometimes result in being persecuted and martyred. He was not a failure but Jesus said he was the greatest prophet (Matt. 11:11).

3. Josiah was a good king but was killed in a battle he shouldn’t have been fighting (2 Chron. 35:20-24). What can we learn from this? Don’t fight battles that God hasn’t called you to fight.

4. Joseph was betrayed and sold into slavery, then was falsely accused and thrown in prison. The Bible says “the Lord was with him” even though his circumstances didn’t look that way. God used his adverse circumstances to get him to the right place and then promoted him to be a ruler in Egypt.

5. James, the brother of John, was imprisoned and put to death with a sword, while Peter was imprisoned and miraculously set free (Acts 12:1-10). Why did God send an angel to set Peter free but not James? God doesn’t have the same plan for everyone so stop comparing your situation with those who seem to have it better.

6. Jesus was sinless but was betrayed, falsely accused, and crucified. God’s plan wasn’t thwarted. He became the Savior and paid for the sins of the world, was resurrected from the dead, ascended into heaven and is seated at the right of God the Father.

Sometimes the “good guy and gal” have bad things happen to them, but if you are submitted to the Lord, He always has the last word. Through His amazing sovereignty He will overrule the injustice and use it for His purposes. www.kentcrockett.blogspot.com  www.makinglifecount.net

NEW BIBLE STUDY: Who was the man wearing the linen sheet in Gethsemane?

When I first became a Christian I was told that I needed to “follow Jesus.” I wondered, "How am I supposed follow Jesus when He isn't physically on earth anymore?" I found the answer in Mark 5.

A man was so possessed with demons that he could break chains that were used to bind him. Jesus cast the demons out of the man into a herd of pigs, which rushed over a cliff and into the sea. As Jesus was getting into the boat to leave, the formerly demonized man begged to go with Him.

Jesus wouldn’t let him go. Instead, He said, “Go back home to your own people and report to them how much the Lord has done for you and how He has had mercy on you” (Mark 5:19). Jesus knew he could make a bigger impact by sharing his testimony back home rather than going with Him. The man was following Jesus by obeying Him—and not by physically following Him.

How do we follow Jesus today? By obeying God’s Word and the promptings of the Holy Spirit, who indwells all true believers. You don’t have to become a missionary in a foreign country to follow Jesus. You can do the same as this man—share Jesus where you live right now with the people you already know. If everyone would do this we could evangelize the world in a matter of days.
www.kentcrockett.blogspot.com  www.makinglifecount.net

BIBLE STUDY: Is this a mistake in Matthew 27:9?

If you own a secondhand coat, you weren’t the original owner but received it from someone who was. A secondhand faith doesn’t connect directly with God but imitates someone else’s faith. Some Jewish exorcists who were not true believers in Jesus tried to cast out a demon using His name. They said, "I command you by the Jesus whom Paul preaches.” The evil spirit answered, “Jesus I know and Paul I know, but who are you?” (Acts 19:13-16). The demon knew their faith wasn’t genuine but was an imitation.

These exorcists saw Paul casting out demons so they copied the words he used. Many people today don’t have genuine saving faith but will say the same words their Christian parents used. Their faith isn’t connected directly with God. They attend church because they were brought up going to church, but they don’t live like they believe in Jesus. They’ve deceived themselves into thinking they are Christians because of their secondhand faith.

Jesus asked His disciples, “Who do people say that I am?” They answered, “Some say John the Baptist, and others Elijah, and still others Jeremiah, or one of the prophets” (Matt. 16:14). Someone living at that time was teaching Jesus was Elijah—and even had followers who believed the same thing. These people got their secondhand faith from a false teacher.

Then Jesus asked, “But who do you say that I am?” Peter said, “You are the Christ, the Son of the Living God.” Jesus said, “Flesh and blood did not reveal this to you, but My Father in heaven.” (Matt. 16:17). Peter got his firsthand faith from God's direct revelation to him.

Many people will stand before Jesus on Judgment Day and will be shocked to discover that their faith was secondhand (See Matthew 7:17-23). To find out how to have firsthand faith click here.
www.kentcrockett.blogspot.com  www.makinglifecount.net

NEW BIBLE STUDY: “Why did Jesus talk about Himself in third person?” (Matt. 13:41 “The Son of Man will send forth His angels, and they will gather out of His kingdom…”)