The Pharisees were more concerned with performing religious rituals than connecting with God. We can easily get sidetracked and become modern-day Pharisees. The questions below will examine your motives and will reveal if your relationship with God goes beyond the four walls of a church.

1. Do you view a church building as “God’s house”?
2. Do you believe that Church is something you go to?
3. Do you "go to church" so that the pastor will see you in attendance?
4. Do you give your offerings without ever thinking about the Lord receiving them?
5. Do you give your offerings mainly because you feel pressured by the pastor to tithe?
6. Do you read your Bible because you want others to know you are doing it?
7. Do you serve in your church or elsewhere because you want others to respect you?
8. Do you look down on people who don’t attend church?
9. Do you ever sing to God in worship when you’re not in church?
10. Do you pray more when you are away from church or when you’re in church?
11. Do you ever tell God that you love Him?
12. Are you the same person away from church as you are when you’re in church?

Ask God to show you the correct answers and if something needs to change in your life. “But the goal of our instruction is love from a pure heart and a good conscience and a sincere faith” (1 Timothy 1:5).
www.kentcrockett.blogspot.com   www.makinglifecount.net

Slaying Your Giants is filled with interesting stories, humor, and practical advice about how to conquer 20 giants (fear, depression, discontentment, self-image, anger, and more) 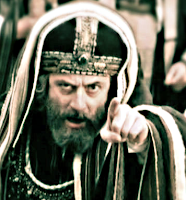 God Has a Purpose for Your Pit

Joseph was thrown into a pit in the wilderness by his jealous brothers. They planned to kill him, but his brother Reuben suggested they throw him into a nearby pit instead (Gen. 37:18-22). It was no accident that the pit just happened to be at that spot. Someone came at an earlier time and dug the hole, and then abandoned it—never realizing that God had guided him to do that. The Lord knew that a pit needed to be at that exact spot, which would one day save Joseph’s life. It was an ordained pit. Notice three things:

1. The pit gave them another option so that Joseph wouldn’t be killed. His brothers intended to kill him (Plan A) but the pit gave them another way to get rid of him without shedding blood (Plan B). Rueben told his brothers, “Shed no blood. Throw him into this pit…but do not lay hands on him”—that he might rescue him out of their hands, to restore him to his father (37:22).

3. The pit was used as a holding tank until the Midianite traders came by, bought him as a slave and escorted him to Egypt (37:25-28). It was no accident that the traders just happened to travel by that route at just the right time. God was leading them (without them knowing it) so they would take Joseph to the ordained destination. The Lord orchestrated a divine appointment to exalt him to be a ruler in Egypt.

Sooner or later, someone is going to throw you into a pit. When it happens, keep in mind that the Lord has a purpose for your pit, just like He had a purpose for Joseph’s pit. Even though it’s not the best of circumstances, it’s keeping something worse from happening to you. Your enemy might think that he has won by rejecting you, but God always has the last word in your situation. He is using your pit as a temporary situation to get you to a much better place. And He will, if you will keep trusting God, keep your heart right and not get bitter at the one who threw you in the pit. www.kentcrockett.blogspot.com  www.makinglifecount.net

Do you have questions about the Bible? Read 66 Answers to Bible Questions