Humbling Yourself Under God's Hand

Don’t skip first base. A relationship with God begins with humbling ourselves before Him. Humility is the key that unlocks God’s grace and mercy in our lives. “Clothe yourselves with humility toward one another, for God is opposed to the proud, but gives grace to the humble. Therefore humble yourselves under the mighty hand of God that He may exalt you at the proper time” (1 Peter 5:5–6). Notice 4 things:

1. God opposes proud people but gives grace to the humble. How would you like God to oppose everything that you do? Proud people see themselves as self-sufficient and don’t need God. When we humble ourselves it opens the door to receive God’s grace and mercy, which brings His blessing on our lives.

2. The only one who can “humble yourself” is yourself. No one can do this for you. Only you can do humble yourself. Humility means to yield right of way. A “yield” street sign means to let the other person go before you. We view others as more important than ourselves. “With humility of mind let each of you regard one another as more important than himself” (Phil. 2:3).

3. Humble yourself under God’s mighty hand. We realize God’s hand is powerful and that He is ruler over the entire world (1 Chron. 29:11-12). Humbling ourselves means we yield completely to Him and let Him have His way in our lives.

Do You Trust the Kicker? 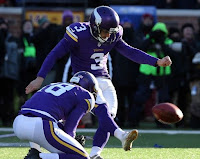 Suppose you’re at a football game and your team is on the other team’s 20-yard line with the clock stopped. One second is left in the game and you’re losing by 2 points. The kicker runs on the field and if he kicks the field goal your team wins the game.

Only one problem. The kicker is terrible! He’s missed most kicks all year. Nervous fans are squirming and afraid to watch. A fan yells, “He'll miss this one, too!” Why are they worried? They don’t trust the kicker.

Consider another scenario. A different kicker comes in for the final play. This player has never missed a field goal all season. The fans give each other high-5's because they're confident he will make the kick. Why aren’t they worried? They trust the kicker.

Here’s the real kicker. Worry is a trust issue. We worry because we don’t trust that God is in control and will fail us in our time of need. Worry never trusts—and trust never worries. You can’t worry and trust God at the same time. Since trust forces out worry, your worry will leave by placing your complete trust in God. Here's how.

2. Trust grows as we believe what He has promised. Trust increases as you deepen your fellowship with God. Although you won’t see God until after you die, you can see what He has promisedin His Word, the Bible. God has given us proof the Bible is true through fulfilled prophecies about the future. It’s impossible for Him to lie (Heb. 6:18) and He stands behind His promises (2 Cor. 1:20).

My wife and I were on a flight from California to Florida when the pilot was forced to land in Texas due to severe weather. We stayed that evening in Houston and the next morning caught a connecting flight to Jacksonville. Even though our original travel plan was interrupted and diverted, we still ended up at the right destination.

As we seek to follow God and His plan, sometimes we’re diverted to another path. That doesn’t mean we can never get back to the right place. God’s sovereignty works like catching a connecting flight. He takes you where you are right now and redirects you to the correct destination.

1. We can be diverted to another path by others’ rejection. Joseph’s brothers hated him and sold him as a slave to some Midianite traders. Joseph caught a “connecting ride” to Egypt where God promoted him to be a ruler (Gen 37, 41). If you lost your job or went through a divorce, remember that God still has a plan you.

2. We can be diverted to another path by our own rebellion. God told Jonah to go preach to the people in Nineveh. Instead of obeying Him, Jonah caught a ship going in the opposite direction. The sailors threw him overboard and a “connecting whale” swallowed him and took him back to Israel. No matter how far you’ve strayed from God, He will still provide a way back to Him.

3. We can be diverted to another path through adverse circumstances. These are unforeseen situations that sidetrack us, like the severe weather that forced our plane to land in Houston. The apostle Paul was sailing to Rome when a terrible storm wrecked the ship on the island Malta. After God used Paul to heal many people on the island, he caught a “connecting ship” (an Alexandrian boat) and still ended up in Rome (Acts 27-28).

How to Forgive Your Enemy

Jesus told a parable about a king that forgave a slave who owed him $50 million in today's dollars. It would take him 4,500 lifetimes to pay it off, yet the merciful king dismissed him from the entire debt! You’d think the slave would be so grateful for being forgiven that he would forgive everyone who owed him as well. Not so with this guy. When he found a fellow-slave who owed him $15, he started choking him, saying, “Pay back what you owe me!” (Matt. 18:28).

Are you choking someone who has hurt you? You aren't physically strangling your enemy, but what about in your mind? The $50 million debt represents the debt we owe to God. When we ask God's forgiveness, the merciful King dismisses the debt. Since we’ve now received His mercy, He wants us to extend mercy to our enemies and dismiss their debt as well.

2. Change the way you view the person who hurt you. You won’t forgive as long as you’re angry at your enemy, so you’ll need to change how you view him. The king was angry at first but then "felt compassion" for the slave, which moved him to forgive him (Matt. 18:27). When his emotions changed from anger to pity, forgiveness followed. Find a way to feel pity and compassion for your enemy. Perhaps the person is lost, is mentally ill, or was abused as a child—see them in that way. (I’ve shared real examples of this in my book Slaying Your Giants pp.59-70.)

3. Let go by taking your hands off your enemy’s neck. People owe different kinds of debts. Some people owe money. Others might owe you an apology. Perhaps you’re upset because someone hasn’t thanked you. Keep in mind that hateful people never apologize, and ungrateful people don’t say thank you. Quit expecting your enemy to make things right with you. Instead of choking him (or her), trying to force him to repay, take your hands off his neck. Take the loss and let it go, just as the king let go of the $50 million debt that was owed to him.