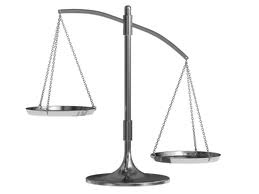 Proverbs 11:1 says, "A false balance is an abomination to the Lord, but a just weight is His delight."  Some merchants in biblical times would cheat their customers by using two sets of weights when weighing merchandise.  They placed lighter stones on their scales when they were selling so that a lesser quantity was sold for a stated price.  Heavier stones were used when buying so they would receive more for the same price.

Of course, they couldn't hide their sleazy tricks from God because He called it “an abomination.”  On the other hand, the Lord was pleased when he observed honest businessmen using “a just weight.”

God sees our motives and evaluates everything we do.  Many people incorrectly assume that they'll be happier if they cheat.  Students cheat on tests.  Adults cheat on income taxes.  Crooked businessmen cheat their customers.  They fail to realize that God is watching them and won't allow them to enjoy what they get.  Proverbs 20:17 says, "Bread obtained by falsehood is sweet to a man, but afterward his mouth will be filled with gravel."  It looks like they are benefiting at first, but the Lord won't let them enjoy what they get.  It will turn into gravel!

Instead of cheating, why not do what’s right and trust God with the outcome?  Remember that the Lord will reward you if you’ll do right and will more than make up the difference for you.