Jesus said, "If anyone wishes to come after Me, he must deny himself, and take up his cross daily and follow Me" (Luke 9:23).  Notice that He put a condition on following Him.  He didn't say you must deny the devil, but you must deny yourself. Why? Because "Self" is the number one thing that keeps you from following Jesus. Self is even a bigger obstacle than Satan. "Self" is the most selfish person in the world, always demanding his own way. And guess what? He's living inside you!

Self is also hard to recognize. In fact, Self is so good at disguising itself, you can act selfishly and then deny that you're acting that way!  Here are some ways to unmask Self so you can identity him.

Now you know why Jesus said you must deny yourself.  The only way to stop Self from controlling you is to nail him to the cross every day. By an act of your will, you tell him, "I'm not listening to you. I'm going to follow Jesus today!"
http://www.kentcrockett.blogspot.com/
Posted by Kent Crockett at 3:12 PM

1. God will give you a new respect.  Joshua 5:1 says, "When all the kings of the Amorites...and the Canaanites...heard how the Lord had dried up the waters of the Jordan before the sons of Israel until they had crossed, that their hearts melted, and there was no spirit in them any longer because of the sons of Israel." The Amorites and Canaanites had probably sent spies to watch them come into their land. When they saw the waters parting, they were terrified!  They had a new respect for Israel and knew they would never be able to defeat them. Your enemies will also be afraid of you when you do what God says.

2. God will give you a new reputation. Joshua 5:9 says, "Then the Lord said to Joshua, 'Today I have rolled away the reproach of Egypt from you.'" What does that mean? After they had left Egypt, the Egyptians had mocked them for wandering in the wilderness for so long.  They probably said, "Israel has no vision. They don't know where they're going!" (See Ex. 14:3).  The Egyptians didn't realize that God was leading Israel by a cloud by day and a pillar of fire by night.  The timing wasn't right for them to enter the land.  But now that they had crossed the Jordan, God says, "I'm now vindicating you.  I'm removing the reproach of the Egyptians. You are now in the land I have given you!"

3. God will give you new provision.  God stopped sending manna to them on the day they started eating from the land (Joshua 5:12).  By entering the Promised Land, God gave them something much better than what they had been eating.  Now they had more food and a better variety.

4.God will give you a new protection. Joshua saw a man with a sword and asked who he was. It was the Angel of the Lord who said, "I indeed come as the captain of the army of heaven" (Josh. 5:14).  The Angel never appeared to them in the wilderness, but as soon as they entered the Promised Land, he shows up to assure Joshua that he now had greater protection.

Have you entered the Promised Land or are you still wandering in the wilderness?
http://www.kentcrockett.blogspot.com/

Posted by Kent Crockett at 4:55 PM 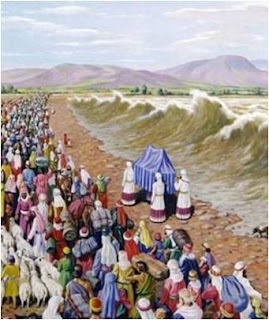 The children of Israel had spent 40 years in the wilderness and now they were about to enter into the Promised Land. The Jordan River was the barrier keeping them out, so they had to cross the Jordan to get there. Sometimes we need to leave the past behind and enter new territory. Usually we will encounter a barrier that keeps us from the new land, and we must break through that barrier to get to what God has for us.  Here are 4 principles in "Crossing the Jordan."
1. You must believe that God has given you the land.  God had promised their fathers that He would give them their own land (Josh. 1:6).  Many of those people died in the wilderness and could not enter it due to unbelief (Heb. 3:19).  Before you can enter any new territory, you must believe that it's God's will and that He has given it to you.
2. You must believe that the Promised Land is better than the wilderness.  Why would you go into the land, unless you believed it was better than the wilderness?  The 12 men that Moses had sent to spy out the land said that it was "an exceedingly good land" (Num. 14:7).  Some people probably said, "I kind of like it here in the wilderness.  This is what I'm used to. I like all the sand, rocks, and dirt out here. I'm not sure I want to go into a land full of green grass and fruit trees."  It's easy to stay with what you're familiar with instead of doing something new. But then you miss out on the blessings God has for you.

3. You must believe that God is with you.  Joshua said, "Be strong and courageous...for the Lord your God is with you wherever you go" (Josh. 1:9).  To leave your comfort zone and tread into new territory, you must believe that God is with you and that you're not on your own. "God is with you" means that He is there to help and guide you through all situations, both good and bad.
4. You must take a step of faith into the Jordan.  Imagine standing at the Jordan River, and you don't know how you're going to get an entire nation across it.  There isn't a bridge over the river. There aren't any boats. But God told them to take a step of faith and He would open the way.  As soon as the priests put their feet in the river, the Lord stopped the water and they crossed over (Josh. 3:13).  Sometimes God wants us to take the step of faith first, and then He will come through.
Do you need to cross the Jordan today?
http://www.kentcrockett.blogspot.com/
Posted by Kent Crockett at 12:03 PM

The parable Jesus told about the wedding garment has left people scratching their heads saying, "I don't get it!"  A king gave a wedding feast to honor his son (Matt. 22:2-14). In this parable, the king is God the Father and the son is Jesus. In those days, they would send out two invitations. The first was to let the person know they were invited to the event, and the second invitation went out when the feast was ready.  The king sent his slaves out with the second invitation to let his invited guests know that everything was ready. Instead of coming to the feast, they ignored the invitation and went about their daily business.

The king decided to open up the feast to everyone. He sent his slaves out on the streets to invite strangers to the wedding feast. This was unheard of!  Kings only invited prestigious people to events like this, but this king invited everyone--including evil people (Matt. 22:10). Just imagine all the thieves, murderers, and prostitutes at this feast to honor his son. This shows that God loves everyone and wants every person to be saved, no matter how evil they may be.


As the king was looking at the wedding hall filled with the guests, he spotted a man who wasn't dressed in wedding clothes. He asked him why he wasn't dressed properly.  He couldn't give an answer, so the king threw him into hell!  Now you're scratching your head, trying to figure out what it means.  To understand this parable, you need to know an important piece of information.

In those days when a wedding was held, the host bought a wedding garment for each person to wear.  It was a free gift to the invited guests.  All the person had to do was put it on, which showed honor and respect for the person being married.  This man had no excuse because he refused the free gift from the king.  The interpretation is the wedding garment was "the robe of righteousness" (61:10).  He was at the feast just to get the free food and had no interest in honoring the son. Many people today want to go to heaven to get the free food, but have no interest in living for the Lord.  On Judgment Day, they will be like the man who refused to wear the wedding garment.

God is giving an invitation to you to spend eternity with Him, but you must accept the invitation and receive the robe of righteousness.  Will you be at the wedding in the next life?
http://www.kentcrockett.blogspot.com/
Posted by Kent Crockett at 3:36 PM