Are you experiencing conflict in a relationship that you want resolved? People who are offended build walls around themselves as a defense mechanism. Here are some steps to bring down the walls.

1. Pray for wisdom (James 1:5). Ask God to show you how to handle your situation. Every relationship is unique and the Lord can give you insights concerning what to do.

3. Give a gift to the other person (Luke 6:27-28). After Jacob cheated Esau out of his birthright, Esau planned to kill him. Years later, Jacob sought to reconcile with Esau by giving him hundreds of goats, camels, cows, and donkeys (Gen. 32:13-14). The huge gift brought down the walls around Esau’s heart and they reconciled (Gen. 33).

4. Find common ground. Common ground can make people forget their differences. You will find liberal Democrats and conservative Republicans hugging each other and giving high fives—if they are pulling for the same football team that scores a touchdown! Conflict comes from magnifying your differences, but resolution comes from magnifying what you have in common.
For more information about resolving conflicts (and 9 other problems) read 10 Secrets to Life’s Biggest Challenges by Peter Lord with Kent Crockett, Chosen Books). www.kentcrockett.blogspot.com 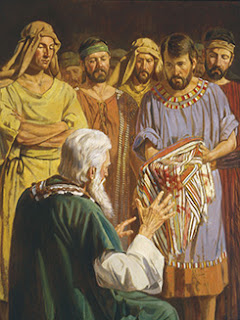 We don’t necessarily act on what is true, but what we believe to be true. Joseph’s brothers lied to their father Jacob. They covered Joseph's coat with blood and showed it to their father, which implied that he had been killed by a wild animal. Jacob said, “Joseph has surely been torn to pieces.” He mourned for his son for many days (Gen. 37:33-34). It wasn’t true, but Jacob believed the lie for 13 years until he found out Joseph was alive.

Some people believe things that aren’t true about God. They’re angry at Him because they think He’s to blame for all tragedies. They are acting on what they believe to be true—but their beliefs are incorrect.

Some people believe things that aren’t true about themselves. They’re depressed and think there’s no reason to live. They are acting on what they believe to be true, but it’s a lie. As long as you’re alive, God has a plan for your life and a purpose to fulfill.

Many people believe things that aren’t true about others. King Saul believed that David wanted to seize his throne as king, which wasn’t true. But Saul acted on what he believed to be true and spent his entire life trying to kill David.

Learning From Your Mistakes

I once stayed in a motel that had a very high star rating in the book published by the motel chain. After I checked in, I realized I had made a huge mistake. The place was on a bad side of town and was filthy. The room had an odor and a bug crawled on the floor. Dirty towels were piled up hallway, which no one picked up for hours.

After my trip I decided to write a nice letter the national hotel office and told them I had always stayed in their motels because we trusted their star system. I requested they lower their rating in their guide to a one-star on this particular motel to honestly reflect its quality so other customers would know what to expect.

A few weeks later I received a letter from the national office thanking me for my comments and offered me a free night’s lodging—in the same motel! Did they read my letter? Were they trying to reward me or punish me?

Some people keep repeating the same mistakes because they haven’t learned from them. Proverbs 26:11 says, “Like a dog that returns to its vomit is a fool who repeats his folly.” Even though the dog got sick by whatever it ate, it goes back and recycles it. It’s even worse than the original meal that made it sick!

We’ve all made mistakes, but our worst mistakes can be our best teachers if we will learn from them. Don’t keep beating yourself up over the mistakes you’ve made, but learn from them. You can share your bad experiences with others to keep them from making the same mistake—like “don’t stay at that filthy motel.” www.kentcrockett.blogspot.com  www.makinglifecount.net
**************************
NOTE: I’ve been sporadic lately about sending out these devotionals because I’ve been busy writing a new book If God Knows My Needs, Why Should I Pray? It will be published by Hendrickson Publishers in May 2016.
**************************
NEW BIBLE STUDY: “Why did the apostle Paul turn people over to Satan?”