Does Time Heal All Wounds? 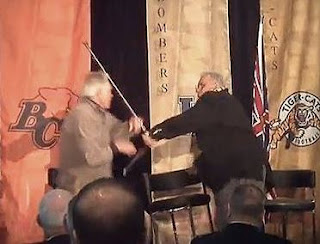 In the 1963 Canadian Football League championship game, QB Joe Kapp got into a fight with Angelo Mosca, who was a defensive lineman on the opposing team. The referee stepped in and broke up the fight. After the game was over, they continued to dislike each other.

Forty-eight years later in 2011, the two former pro football players were invited to appear at a luncheon for the Canadian Football League. Joe Kapp was 73 years old and Angelo Mosca was 74 years old. When the two players were introduced, the luncheon's host give Kapp an olive branch to give to Mosca as a peace offering. Everyone thought it would be a light-hearted moment about their feud and would bring a laugh from the audience.

Instead of handing it to him, Kapp pushed it into Mosca’s face and then punched him. Mosca retaliated by hitting him with his cane. Like the referee did 48 years before, the host stepped in and broke up the fight. Both men were still angry over an incident that happened in 1963. If time could heal wounds, 48 years should be enough time.

God put a time limit on how long to be angry. It’s not 48 years, but less than 24 hours. “Be sure to stop being angry before the end of the day” (Eph. 4:26 NCV). If you don’t throw water on the fire before the sun goes down, your anger will keep flaring up—even 48 years later.