Knocking Until the Door Opens 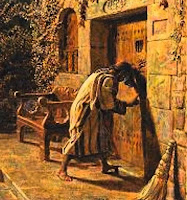 Late one afternoon when the office was ready to close, the business manager finally allowed a life insurance salesman to see him. The manager told the salesman, “You should feel highly honored. Do you know that I have refused to see seven insurance men today?”
“I know,” replied the salesman. “I’m them!”

Jesus told a parable about a man who went to a friend’s house at midnight and knocked on his door, asking for bread (Luke 11:5-8). His neighbor told him to go away. But the man kept knocking on the door, knowing his friend wouldn’t get any sleep until he opened the door and gave him bread. Jesus concluded, “Because of his persistence he will get up and give him as much as he wants.”

The man did not give him the bread because of their friendship. The only reason for granting his request because the man kept pounding on the door. Jesus used this as an illustration of the kind of persistent faith that He’s looking for. Persistence is the most overlooked way to receive God’s blessings. (If God Knows What I Need, Why Should I Pray? p.81)

Posted by Kent Crockett at 5:47 PM