Joseph's Side of the Story 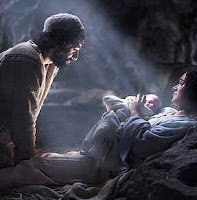 You’ve heard the Christmas story a hundred times. Everyone hears about baby Jesus, Mary, the angels, the shepherds, and the wise men. But what about Joseph? He’s often overlooked, but is a great role model for us:

1. Joseph loved grace more than justice. Put yourself in his shoes. He finds out his bride-to-be was pregnant and the only natural explanation was she had cheated on him. I’m sure Mary explained that the angel Gabriel informed her that she was pregnant by the Holy Spirit and she would give birth to the Son of God (Luke 1:26-35). But that was a hard pill to swallow.

If he had exposed her publicly, the Law commanded that she be stoned to death (Dt. 22:23-24). Joseph was “a righteous man, and not wanting to disgrace her, desired to put her away secretly” (Matt. 1:19). Joseph decided to send her away secretly because he loved grace more than judgment.

2. Joseph trusted the Lord more than his own logic. His plan was interrupted when an angel appeared to him in a dream and explained that she really was conceived on the Holy Spirit (Matt. 1:20-23). Joseph believed the divine message even though it made no sense. A virgin conceiving had never happened before. There will be times when you will also need to trust the Lord more than your own logic (Prov. 3:5-6).

3. Joseph accepted his supporting role in life. Some people have leading roles in life while others have supporting roles. Both roles are equally as important. Joseph accepted his role as her husband. By taking her to be his wife, it appeared to others that he had gotten her pregnant. How would it sound to say, “An angel told me that no human got her pregnant.” No one would believe that story. Sometimes you have to do what is right even if only God knows the truth!