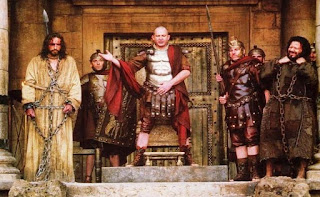 Pontius Pilate conducted an opinion poll about what to do with Jesus. His approval ratings were down, so he asked the crowd whether to release Jesus or the murderer Barabbas. The chief priests stirred up the crowd and pressured him to release Barabbas. “And wishing to satisfy the multitude, Pilate released Barabbas” (Mark 15:15). Pilate wanted to be popular more than he wanted to be right. And many people today are more interested in being popular than standing up for the truth. Here’s how to overcome peer pressure.

1. Be more concerned about what God thinks of you than what people think.
It’s not poplar to follow Jesus and you’ll be ridiculed for standing up for what you believe. To have courage, you must be convinced that the Bible is true and everything Jesus taught is the truth. Jesus never took an opinion poll. We never see Jesus asking, “How am I doing? What is my approval rating?” He was only interested in pleasing His Father.

2. Your inner strength must be greater than the outward pressure to conform.
If I squeeze a cracker it will crumble because the outward pressure is greater than the cracker’s strength. But if I squeeze a baseball it won’t crumble because it’s stronger than the pressure being applied. Pilate thought Jesus was innocent, but he didn’t believe it enough to overcome the pressure applied by the angry crowd. He crumbled because he wasn’t strong in his convictions.