How Did the Shepherds Find Baby Jesus? 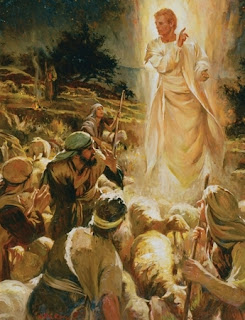 You know the story. An angel appeared to some shepherds at night and announced the birth of Jesus saying, “You will find a baby wrapped in cloths and lying in a manger” (Luke 2:12). That’s it? No further instructions? How did they find Him? Maybe it happened something like this…

In April 2001, my friend Eugene needed his car windshield replaced. The repairman would be coming to town on a Sunday so Eugene left his vehicle at his workplace at 7 am. It was a cold morning and a storm was coming, but for some reason Eugene decided to walk home instead of having his wife pick him up. After walking a few blocks it started to lightly rain and he heard a baby crying in the distance.

As he kept walking, the cries grew louder and sounded desperate. He looked at a nearby bowling alley, which was closed, and noticed a baby stroller parked behind the building. Eugene sprinted to the stroller. Inside was a little baby that had turned blue due to the cold. He ripped off his shirt, quickly wrapped up the infant and called 911 on his cell phone. The police came and took the baby to the hospital.

The baby was too far away from the street to hear from inside a car. Only someone walking down the street could have heard the cries. Just minutes after the police left, it started pouring rain with winds reaching 40 mph. If Eugene hadn’t been walking down that street at that precise time, the baby would have died in the storm. Later it was discovered that a little boy who lived in a nearby apartment complex took the baby for a stroll and left her there.

Did God lead Eugene to find that baby? Yes He did. But Eugene didn’t know God was leading him. The Lord put a thought in Eugene’s mind to walk home in bad weather instead of calling for a ride. And that’s how God guided him to the right place to find the baby.

God did something similar with the shepherds. I believe as they hurried into town the Lord put a thought in their minds to turn left at the tax collector’s office rather than right. As they walked down the street they heard a baby crying and followed the sound to find Jesus.