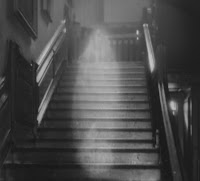 Ghost hunters try to video paranormal images from “haunted” houses in an attempt to prove ghosts really do exist. For example, they’ll claim to see a soldier wearing a Confederate uniform who was killed in the Civil War. They’ll ask questions to the deceased person and record EVPs (Electronic Voice Phenomena) that seem to give an intelligent answer. According to ghost hunters, this is proof the spirits of dead people are still wandering in the place where they died.

But think about it. How could a ghost wear clothes? A uniform is made of cloth, so how could the material appear as a ghost? What the hunters see and hear may actually be real, but they aren’t ghosts. They’re demons. These demons are called “deceitful spirits" (1 Tim. 4:1) because they try to convince people they are disembodied spirits of dead people.

Demons are fallen angels who were kicked out of heaven for rebelling against God and are now on earth, trying to lead people away from Jesus Christ. They’re also called “familiar spirits” (Lev. 20:6, Isa. 8:19) because they’re familiar with people who lived in the past and can easily impersonate them. They disguise themselves (2 Cor. 11:14) and can pretend to be a Confederate soldier wearing a uniform, or someone else who has died.

Why? They want us to believe that people don’t go to heaven or hell when they die. Hebrews 9:27 says, "It is appointed unto men once to die, but after this the judgment." Second Corinthians 5:8 says when a believer dies he or she is absent from the body and present with the Lord. There is no in-between state where a spirit is trapped.