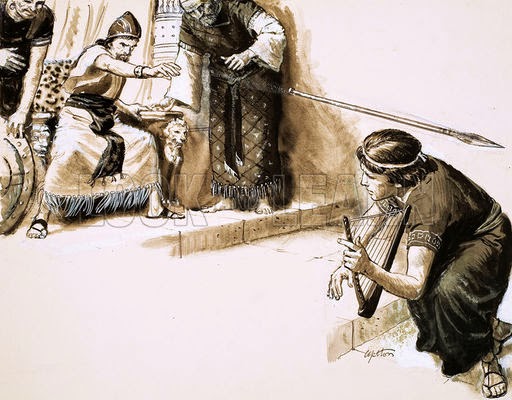 After David killed Goliath, women danced in the streets and sang victory songs. Saul smiled when they sang, “Saul has killed his thousands. . .” Then the women sang the second stanza: "And David his ten thousands" (1 Sam. 18:7). When Saul heard them praising David more than himself, jealousy consumed him. He said, “They have ascribed to David ten thousands, but to me they have ascribed thousands. Now what more can he have but the kingdom?” An evil spirit came on Saul and he “looked at David with suspicion from that day on” (1 Sam. 18:9,10).
Here are three characteristics of jealousy:

Jealousy is suspicious. Saul “looked at David with suspicion” until his dying day. Jealousy views people as suspects who are guilty.

Jealousy feels threatened. Jealousy is rooted in insecurity and will attack the perceived threat. Saul tried to kill David by throwing a spear at him (1 Sam. 18:11).

Jealousy never trusts. Saul had a sneaking suspicion that David was plotting to overthrow him. David had no such intentions but Saul chose to believe the lies in his mind instead. Even when David gave him proof by sparing his life, Saul wouldn’t change his mind and continued to persecute David.

Jealousy destroys relationships and this is why it is dangerous. It can kill marriages. Instead of drawing a person closer, it has the opposite effect and drives the other person away through accusations. Even though jealousy primarily operates in romantic relationships, it can also be found in the secular workplace between co-workers, in political campaigns between candidates, and even in church when someone else is praised for their spiritual gifts.

James tells us where these thoughts are coming from. “If you have bitter jealousy and selfish ambition in your heart, do not be arrogant and so lie against the truth. This wisdom is not that which comes down from above, but is earthly, natural, demonic” (James 3:14-15).

The way to conquer jealousy is to humble yourself, let Jesus be your greatest love, and place your situation in God’s hands. For more information about how to overcome jealousy, read chapter 18 in Slaying Your Giants.  www.kentcrockett.blogspot.com
www.makinglifecount.net   Making Life Count Ministries

NEW BIBLE STUDIES: How did Jonah stay alive in the whale for three days? Did Jonah breath inside the whale or did he die?

Did two different people write the Book of Isaiah?  Some modern-day “scholars” deny that Isaiah wrote the book. This study disproves that theory.

Who wrote the Book of Hebrews?  Hebrews in the only book in the New Testament where the author is unknown. However, it was likely written by one of these three people.