Put Your "Baby" in God's Hands 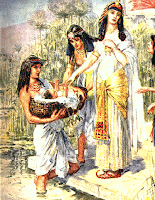 When Pharaoh ordered all the Hebrew baby boys to be killed, the mother of Moses, Jochebed, did something that didn't make sense to the logical mind. She put her baby in a wicker basket and hid him in the reeds by the Nile River (Exodus 2:3). Moses could have been eaten by crocodiles, or the basket could have been swept downstream. But Jochebed put Moses in God's hands and trusted Him to take care of her infant son.

The day will come when you must put your baby in God's hands. The "baby" represents anything that's important to you. It could be your job, something you own, a relationship, or it might even be your child. Perhaps you're fearful or worried that something will happen to your baby. You won't find peace of mind until you let go and transfer ownership of your "baby" into God's hands. The Lord is perfectly capable of handling the situation that you've given to Him.
What happened to Moses after his mother let go of him? A few minutes later, Pharaoh's daughter just happened to go to that spot on the river and found baby Moses. Then, by an act of God's sovereignty, Pharaoh's daughter paid Jochebed wages to raise her own son! (Ex. 2:5-9) And not only that, the Lord later used Moses to deliver the Hebrew people from Egyptian bondage.
When we place our babies in God's hands, it not only releases us from fear and worry, but the Lord is now free to do great things with what we've surrendered to Him. What do you need to put in God's hands?
Keep looking up!
Kent
Posted by Kent Crockett at 9:31 PM 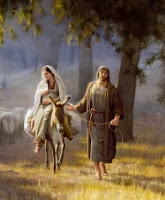 A divine appointment is when God leads someone, who usually doesn't know he or she is being led, to a certain place, at the perfect time, to accomplish a specific purpose. The Bible records hundreds of these divine appointments, and Joseph and Mary's trip to Bethlehem was not only a divine appointment, but also fulfilled an ancient prophecy.

In the Old Testament, Micah prophesied 700 years into the future and pinpointed the town of Bethlehem as the birthplace for the Messiah. "But as for you, Bethlehem Ephrathah . . . from you One will go forth from Me to be ruler in Israel, His goings forth are from long ago, from the days of eternity" (Micah 5:2). Out of all the cities on the entire planet, God circled tiny Bethlehem on the map.
Now here's the problem. The virgin Mary and her husband Joseph lived in Nazareth, not Bethlehem (***see note on Nazareth below). They had no intention of traveling to Bethlehem to give birth, so how would they get there to fulfill the prophecy?
In what can only be described as an act of God's sovereignty, the Roman Emperor Caesar Augustus issued a decree that a census be taken, which required everyone to return to their original cities (Luke 2:1-5). This forced Joseph to return to Bethlehem because he was of the house and family of David. Caesar was just a pawn in God's hand, and the Lord used a pagan king to get Mary to Bethlehem at just the right time to give birth to Jesus and fulfill Micah's prophecy!
NEVER FORGET THAT GOD IS IN CONTROL. Even when humans misuse their free will. Even when evil seems to be prevailing. God can overrule what man does, and He always has the last word. Always.
Have a Merry Christmas,
Kent
***I led a tour group to Nazareth in October 2008, where we saw a wine press hewn out of the bedrock and a rock quarry that dated back to the 1st Century. To see pictures of these, go to http://www.nazarethvillage.com/research/content/wine-press
Posted by Kent Crockett at 1:53 PM

The Judgment Seat of Christ Are you ready to stand before God? That day is coming. "For we must all stand before the judgment seat of Christ, that each one may be recompensed for his deeds in the body" (2 Cor. 5:10). If you are a Christian, you are reading about yourself in this verse. Actually, this is something to look forward to.

You might wonder, "If God has forgiven all my sins, why am I going to be judged for what I've done?"
When you accepted Christ as Lord and Savior, all your sins were forgiven. This judgment isn't to examine your sins. It's to evaluate your faithfulness to determine your rewards in heaven.
The Greek word for judgment seat is "bema." After an athlete in biblical times won an event, he would go stand before the bema seat in the coliseum to receive his reward. A wreath would be placed on his head, similar to an Olympic champion receiving a gold medal. At the judgment seat of Christ, each believer will receive a reward from the Lord according to what we have done for Him during our lives on earth. This is why Jesus encouraged us to "lay up for yourselves treasures in heaven" (Matt. 6:20) and Paul said, "Run in such a way that you may win" (1 Cor. 9:24).
Your rewards will determine your eternal assignments in heaven--what you'll be doing in the next life. Yes, you will have a job in God's kingdom! We will serve Him forever, which means will be fulfilling God's assignments (Rev.7:15). Heaven would be like hell if we had nothing to do forever. Jesus said these rewards are so exciting that, if we could see them, we would "leap for joy" (Luke 6:23).
See you at the bema,
Kent
Please feel free to forward this email to your friends. http://www.kentcrockett.blogspot.com/
Posted by Kent Crockett at 7:55 PM