On Your Way Home from Church... 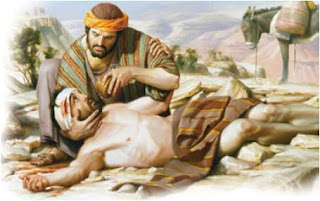 In the parable of the Good Samaritan, a man going from Jerusalem to Jericho fell among robbers and was beaten until he was "half dead." The wounded man on the road would die unless someone helped him.  Jerusalem was 3,000 feet higher in elevation than Jericho.  A colony of 12,000 priests lived in Jericho, and they would travel "up the road" to Jerusalem to serve in the temple.  When they had finished their weekly temple duty, they would go "down the road" back to Jericho.

In Luke 10:31, a priest was going "down the road," which meant he had finished serving God in church, uh, I mean the temple, and was on his way home. A priest was the highest position in the temple, offering up people's sacrifices to God.  If anyone was supposedly close to God, it was a priest.

What did the priest and the Levite have in common?  They both supposedly loved and served in the temple. They acted one way inside of the temple and another way when they were away from it. They claimed to love God but it wasn't manifested in their daily walk in how they treated others.

Many people who attend church are like that priest and Levite in the parable. They act one way inside the church, but completely different after they leave. They claim to love God during the church service, but it isn't manifested on the daily road of life.  Another word for this "double life" is hypocrisy--acting one way at church and completely different away from it.

The parable concludes when a Samaritan comes by and rescues the man. The Samaritans were hated by the Jews because they had a rival temple on Mt. Gerazim. (This is why the woman at the well in John 4:20 asked Jesus which was the right mountain to worship God--Jerusalem or Gerazim).  Ironically, the Samaritan worshipped in the wrong temple, yet showed more compassion than the priest and the Levite who served in the right temple.

It just goes to show that it's not the church you attend that makes you right with God, but what's inside your heart.  So next Sunday, when you're on your way home from the temple, uh, I mean church, remember the parable of the Good Samaritan.
http://www.kentcrockett.blogspot.com/
Posted by Kent Crockett at 3:06 PM

"Do you love me more than these?" 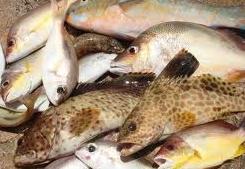 Not long after Jesus was resurrected, the disciples went fishing on the Sea of Galilee. They fished all night and caught nothing. As the sun was coming up, Jesus was on the beach and yelled to them, "Cast your net on the right-hand side of the boat" (John 21:6). This time the net filled up with large fish. Jesus showed His power over nature by commanding the fish to swim into their net.

Peter pulled a net full of 153 fish to shore (21:11).  After the disciples finished eating breakfast with Him, Jesus asked Peter, "Do you love me more than these?" (21:15)  These what? It had to be one of two things. He could have meant "these other disciples." Peter had bragged that the other disciples would deny Him, but he would never do that. But, of course, he did. So Jesus would be pointing to the other disciples.

The other possibility is "these fish." We don't usually say "these" when we're talking about people. In verse 10, Jesus had asked him bring him some of the fish they had caught, so He was probably pointing at those fish. Why would He use fish as a comparison? It was because Peter was probably thinking about returning to his fishing business. He may have been thinking, "I've put in three hard years of following Jesus, and I'm ready to go back to fishing. I love fishing!"

Jesus in so many words said, "Peter, I'm not done with you yet. You're just getting started. Now I want you to go out and teach people everything you've learned from Me. Feed my sheep. Do you love me more than the fish?"

I love my wife. I also love hot Krispy Kreme donuts. I love football, pizza, enchiladas, and my kids. I love to go to the beach. And I love God. We love to use the word love. We use it so often that it has lost its meaning.

In 145 B.C., seventy scholars gathered together to translate the Old Testament from Hebrew into Greek. This translation became known as the "Septuagint." The Greeks were pagans who worshipped idols and had several words for human love, but they didn't have a word to describe the true God's unconditional love. This presented a problem for Bible translators.

Here is what the translators did. They searched for a word in the Greek language that was hardly ever used. In fact, this word was only found four times in literature. That word was "agape." They took that word and gave it an entirely new meaning--God's unconditional love. So whenever they came to the Hebrew word "hesed" which meant "God's loving kindness" in the Old Testament, they translated it into Greek using the word "agape." This kind of love only comes from God in heaven.

God puts agape love inside every believer. "The love (agape) of God has been poured out in our hearts through the Holy Spirit who was given to us" (Rom. 5:5). The love of God is inside you, but you must let it out. It's like the faucet in your house. The faucet doesn't produce any water, it only allows the water to flow. When God says to "agape your enemies" (Luke 6:35), you choose to turn on the faucet to let God's love flow through you to them. Will you let God use you in this way today?
Agape,
Kent
http://www.kentcrockett.blogspot.com/
Posted by Kent Crockett at 4:05 PM