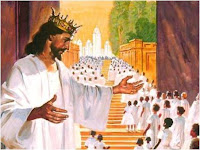 When Jesus returns at the Second Coming, it will not be "the end of the world." There are two Greek words for "world." One word refers to the planet, while the other word means "the age," which is the way God deals with His people during a certain period of time. God will not destroy the planet when Christ returns, but this age as we know it will end. Then a new time period will begin called "The Millennium," which is the 1,000 year reign of Christ on earth (Rev. 20:4). What are some of the things that will happen during the Millennium?
1.Satan will be bound up in the abyss for 1,000 years (Rev. 20:3).
2.The saved people who are alive at the Second Coming will enter the kingdom in their natural bodies (Matt. 25:34).
3.The lost people who are alive at the Second Coming will be cast into hell (Matt. 25:41).
4.Jesus will be king over the entire earth (Zech. 14:9).
5.The curse on the earth as a result of Adam & Eve's sin will be lifted (Zech. 14:11) Thorns, thistles, and weeds will be gone. The earth will become like the Garden of Eden.
6.The animals will be changed back to their original state when they were created. (Isa. 11:6-9). After Adam and Even sinned, many of the animals became predators. They will become peaceful again. The wolf and the lamb will lie down together.
7.Sickness will be removed (Isa. 33:24).
8.The saved people who enter the Millennium will repopulate the earth. (Matt. 19:28) The word "regeneration" in verse 28 means repopulation.
9.The 12 apostles in their resurrection bodies will rule over the 12 tribes of Israel (Matt. 19:28).
10.Many children will be born to the saved people who entered the Millennium in their natural bodies (Isa. 65:23). This is one proof that the rapture cannot happen at the Second Coming. Resurrected people cannot reproduce offspring (Matt. 22:30). We know only saved people will enter the Kingdom. But if everyone is raptured at the Second Coming, every saved person would have a resurrected body and no one would be in a natural body.
That's why the rapture must happen some time before the Second Coming. The people entering the Millennium are the people saved after the rapture, and they are the ones in their natural bodies who will repopulate the earth.
11.At the end of the 1,000 years, Satan will be loosed from the abyss and will deceive the children who were born during the Millennium (Rev. 20:7-10).
To hear the entire message, go to http://www.churchoflivingwater.net/node/23 and click on "The Millennium."
http://www.kentcrockett.blogspot.com/
Posted by Kent Crockett at 11:01 AM

The Power of Peer Pressure 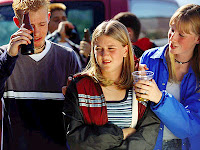 A study was done where 10 high school students were brought into a room. They were shown 3 lines of different lengths on cards labeled A, B, and C. The researcher instructed them to raise their hand whenever he pointed to the longest line.
But what one of the students didn't realize was that the other 9 students had been previously told to point to the second longest line. The purpose of the experiment was to test the effects of peer pressure on an individual.
When the 9 teenagers pointed to the wrong line, the lone teenager would get a confused look and then slip up his hand with the rest of the group. He knew it wasn't the longest line, but he didn't want to be the only one who didn't raise his hand. As they kept bring in new teenagers, they kept producing the same results. They found that 75% of teenagers would conform with the group and give the wrong answer!
1 Kings 11:2 says, "You shall not associate with them, neither shall they associate with you, for they will surely turn your heart away after their gods."
You can't do anything about peer pressure, but you can do something about your child's peers. As a parent, make sure your children are hanging out with the right friends. They need to be involved with the youth group Bible studies at church. If they don't make friends with the right crowd, they'll be submitting to the peer pressure of the wrong crowd.
To hear the entire message on this subject, go to www.churchoflivingwater.net/node/23 and click on "Parenting 101."
http://www.kentcrockett.blogspot.com/
Posted by Kent Crockett at 1:17 PM 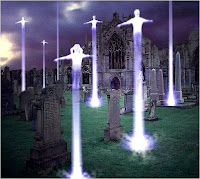 Will the Rapture happen before the 7-year Tribulation Period, where God pours out His judgments on the earth (Rev. 6-19)? I believe so. In Rev. 4, the apostle John is caught up into heaven and what he sees is interesting. Here are some clues that rapture takes place at this time.
1.He is seeing something happening in the future. Jesus tells him "I will show you what must take place after these things" (Rev. 4:1). What he is about to see is something that will take place in the future.
2.A door is open in heaven (Rev. 4:1). John has already seen Jesus in all His glory in heaven in Rev. 1:12-16, so why is it necessary for a door to be open in heaven? Many Bible scholars believe the door opens to let the Church in at the rapture. The next time heaven is opened is Rev. 19:11-14 and His Church is following Him out. Presumably the Church goes in at Rev. 4:1 and comes out in Rev. 19.
3."Come up here" (Rev. 4:1) This phrase is also used in Rev. 11:12 when the two prophets are killed, then resurrected, and ascend into heaven. "Come up here" could mean the Church is being called into heaven in Rev. 4:1.
4.The 24 elders are wearing crowns (Rev. 4:4). After John gets caught up into heaven, he sees 24 elders around the thrones wearing crowns on their heads. Why is this significant? Because Christians will be rewarded at the rapture. The rapture is a resurrection of those who have died in Christ (1 Thess. 4:16-17). Jesus said, "You will be repaid at the resurrection of the righteous" (Luke 14:14). Peter said the crowns would be given out at the rapture (1 Pet. 5:4). Paul also said he would receive a crown at the rapture (2 Tim. 4:8). No one in heaven has been rewarded at this time. So if John is looking into the future and sees 24 elders wearing crowns, it must mean the rapture has taken place.
5.The Tribulation doesn't begin until Revelation 6. John sees that the elders have been rewarded in Rev. 4, and then Jesus takes the scroll in Rev. 5, and He breaks the seals on the scroll in Rev. 6, which starts the Tribulation Period. This shows the rapture happens before the tribulation, which means a "Pre-Tribulation" rapture.
To hear the entire message on this subject, go to http://www.churchoflivingwater.net/node/23 and click on "The Pre-Tribulation Rapture."
http://www.kentcrockett.blogspot.com/
Posted by Kent Crockett at 10:24 AM