The Rapture is No Joke

After radio preacher Harold Camping wrongly predicted the rapture on May 21, this billboard appeared along highways. Matthew 24:36 tells us that no one can predict the day or hour. If the Father didn't tell Jesus when it would be, why would He tell Harold Camping?
This false prophecy by Camping has made the rapture a big joke on the Internet and by late night comedians. But the fact is, the rapture IS are real event that's going to happen some day. First Thessalonians 4:16-17 says, "For the Lord Himself will descend from heaven with a shout...the dead in Christ will rise first, then we who are alive will be caught up together with them in the clouds to meet the Lord in the air." The words "caught up" in the Latin Vulgate is "rapturo" which is where we get the word rapture. The Greek word means "to rapidly snatch up."
Jesus will come in the air to receive His Church to Himself and take us to heaven. He will not return to Earth at this time. John 14:3 says, "And if I go [to heaven] and prepare a place for you [in heaven], I will come again and receive you to Myself, that where I am [in heaven], there you many be also [in heaven]." The rapture is when He takes His Church to heaven, but the Second Coming is when we return with Him at a later time to Earth.
First Corinthians 15:52 says it will happen "in a moment, in the twinkling of an eye." The Greek word for "moment" is atomos (where we get the word atom) and means "an indivisible unit." It will happen so quickly that it will appear to the unbelievers who have been left behind as if all Christians have disappeared.
To understand five differences between the rapture and second coming, go to http://www.churchoflivingwater.net/node/23 and click on "Rapture vs. Second Coming"
http://www.kentcrockett.blogspot.com/
Posted by Kent Crockett at 10:58 AM

Who is the Antichrist?

I hope you weren't duped by the TV preacher who claimed the rapture would happen last Saturday. Jesus said no one can know the day or the hour when He comes (Matt. 24:36). Many people have also tried to figure out who the Antichrist is. You can't figure that out either because "he will be revealed in his time" (2 Thess. 2:6).

How Can the Bible Predict the Future?

How can the Bible predict future events when they haven't happened yet? It becomes simple once we understand three things.
1.God knows everything that will happen in the future. Isa. 46:9-10 says, "I am God and there is no one like Me, declaring the end from the beginning and from ancient times things which have not been done." Our awesome God can see future events, so He is able to tell us ahead of time what will happen. This also shows He is in control of those events or He would not be able to predict them.
2.God told His prophets what would happen in the future and they recorded His words in the Scriptures. Acts 3:21 says, "God spoke by the mouth of His holy prophets from ancient time." He spoke to the prophets, who were His mouthpiece and they recorded the prophecies about the future in manuscripts.
3.The prophetic Scriptures were copied and preserved until the prophecy was fulfilled. The original manuscript was carefully copied by scribes. To ensure accuracy, each letter of the manuscript was counted and rechecked. If they made one mistake, the manuscript was burned and the scribe had to start over! The manuscripts were continually copied and passed on throughout the centuries. The reason you have a Bible today is because of the incredible faithfulness of the scribes who very carefully copied the manuscripts for over two thousand years. I challenge you to copy just one page of your Bible without a single mistake and see how difficult this would be. (By the way, have you read the entire Bible through even one time?)

Now that we have the manuscripts, we can look back and see how hundreds of prophecies by Daniel, Jeremiah, Isaiah, Zechariah, and others have been fulfilled. Jesus fulfilled 315 Old Testament prophecies concerning His first coming, so we know the prophecies of the Second Coming will also come to pass. This just goes to show that you can trust the accuracy of the Bible, not just concerning future events, but everything else it says as well. http://www.kentcrockett.blogspot.com/
Posted by Kent Crockett at 9:50 AM

Limburger in Your Mustache 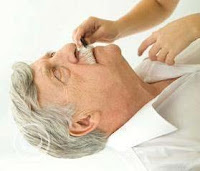 A little boy snuck into the bedroom of his grandfather when he was sleeping. He stuck some Limburger cheese on his mustache and then slipped out the room. A little while later, the grandfather woke sniffing. "This bedroom stinks," he muttered. He walked into the living room and said, "This living room stinks." When he entered the kitchen he griped, "This kitchen stinks too!" Finally he walked outside, took a whiff and yelled, "The whole world stinks!"
Some people have Limburger cheese in their attitudes and so wherever they go, it stinks. Discontentment is a restless spirit that can never be satisfied. As a result, it goes on an endless search to find greener grass--that mythical place where everything is perfect. Contentment is just the opposite. It's having a peaceful spirit that has learned to be happy in every situation.
Do you have Limburger in your mustache? Paul said, "I have learned the secret of being content in any and every situation" (Phil. 4:12). There's good and bad in every situation. Contentment comes by finding whatever is good in your situation, focusing on it, and making it bigger in your mind than your problems. To hear the entire message on this topic, go to http://www.churchoflivingwater.net/node/23 and click on "A Contented Heart."
www.kentcrockett.blogspot.com
Posted by Kent Crockett at 9:56 AM 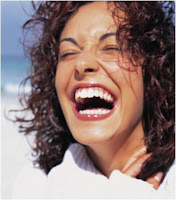 A man walked by a table in a hotel in Las Vegas and noticed three men and a dog playing cards. Amazingly, the dog appeared to be winning. The man said, "That must be a very smart dog." One of the card players replied, "Nah, he ain't so smart. Every time he gets a good hand, he wags his tail!"

Jesus said, "These things I have spoken to you so that My joy may be in you, and that your joy may be full" (John 15:11). The best advertisement for Jesus Christ is a joyful Christian. It has been said that 18th century evangelist George Whitfield had so much joy that people wanted to be saved just by seeing the joy on his face. Do you have that kind of joy? To hear the entire message on this topic, go to http://www.churchoflivingwater.net/node/23 and click on "A Joyful Heart."
http://www.kentcrockett.blogspot.com/
Posted by Kent Crockett at 10:59 AM