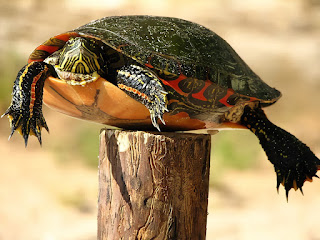 The late Alex Haley, author of the bestselling novel Roots, had a unique picture on his office wall of a turtle sitting on top of a fence post. Whenever someone asked about it, Haley would say, "If you see a turtle on a fence post, you know that he had some help. Any time I start thinking, 'Wow, isn't this marvelous what I've done?' I look at that picture and remember how this turtle, me, got up on that post."

Imagine a full-size turtle on the top of a five-foot fencepost, the shell of its belly resting on the post, and its legs flailing helplessly in the air but not moving an inch. You don't know how it got up there, but you do know someone had to pick it up and place it there. Likewise, we can't receive a promotion unless the hand of God puts us there.

Psalm 75:6-7 says, "For not from the east, nor the west, nor from the desert comes exaltation; but God is the Judge; He puts down one and exalts another." That means we shouldn't be envious of those who have received a promotion, or be the least bit upset if we've been passed over for one. Advancing to a higher position is ultimately in God's hands.

But there’s another lesson to be learned from the turtle on the fence post. It takes a hand to get the turtle safely down from the fence post as well. God will purposely place us in lower positions to teach us valuable lessons that we need to know about humility and obedience. Joseph spent thirteen years in low positions before God promoted him to being prime minister of Egypt.

Learn to be happy serving God wherever He has placed you—whether it’s a high position or a lowly one. After all, the turtle is probably happier on the ground. www.kentcrockett.blogspot.com

BIBLE STUDY:  Was Jonah a false prophet since his prophecy didn’t come to pass?

Posted by Kent Crockett at 3:38 PM