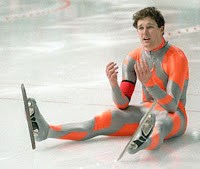 In the 1988 Winter Olympics, speed skater Dan Jansen was just hours before his race when he received the sad news his sister Jane lost her battle with leukemia. She had battled it for nine years. Dan was determined to win the race in memory of his sister.

When the gun sounded, he sprinted from the starting line only to have his skates lose traction, causing him to fall down. Four days later in the 1000-meter race, he fell again. Dan was one of the greatest speed skaters in the world, but would go home without an Olympic medal.

Dan received close to 10,000 letters from around the world. Sports illustrated carried the story about a letter from Mark Arrowood, a disabled young man from Pennsylvania. Mark wrote, “Dan, I watched you on TV. I’m sorry you fell two times. I am in the Special Olympics. I won a gold medal just after my dad died. I want you to have my gold medal. Try again in four years!” Inside the envelope was Mark’s gold medal from the Special Olympics.

Dan put Mark’s medal inside a glass trophy case in his parents’ dining room. Then in 1990, Mark died, too. Now Dan was determined to win a medal for both Jane and Mark. In the 1992 Olympics, he came in fourth. Again, no medal.

Maybe you, like Dan, had a disappointing fall. Your marriage failed. Your business failed. You had a moral fall. Don’t give up. Get up! “A righteous person falls seven times and rises again” (Prov. 24:16). Someone has said, “Every setback is a setup for a comeback. God wants to bring you out better than you were before.” You can still make a comeback, if you’ll let the One who died for you be your inspiration. You can still finish as a winner.

BIBLE STUDY: If Jesus knew all things, why did He ask questions?

Posted by Kent Crockett at 6:48 PM Gerald Mann once went on a hunting trip in Alberta, Canada. On the first morning, his group jumped in the truck to head out to hunt and discovered that the only gear that worked was reverse. The guide said, “We’ll have to back up to the nearest town and get another vehicle.”

The group started driving down the road backwards at about 20 miles per hour until they came up behind a farmer pulling a trailer full of heifers. The farmer’s old truck was going about 10 miles per hour and had no rearview mirrors. The guide pulled out in the oncoming lane to pass and gunned the vehicle in reverse. The farmer was shocked as he watched the group of hunters passing him in reverse gear!

As they continued driving down the road backwards, they noticed flashing lights quickly approaching them. A Royal Canadian Mounted Policeman pulled them over, walked up to the truck, and told the hunters, “We have a law in Canada, you can’t go forward—backward.”

That Canadian law is also a law in the kingdom of God. We can’t go forward as long as we’re looking backward. Paul wrote, “Forgetting what lies behind and reaching forward to what lies ahead, I press on toward the goal for the prize of the upward call of God in Christ Jesus” (Phil. 3:13). You can’t move forward in reverse gear. Until you forget what’s behind you, you will never press forward in your calling.

God has great plans for tomorrow, so stop looking in the rearview mirror at your past mistakes. Life is like walking on a tightrope. Take one step at a time and there’s no looking back. Keep your eyes fixed on the road the Lord has set before you. Whatever God has planned for you, it’s not behind you.

BIBLE STUDY: Was John the Baptist a reincarnation of Elijah? 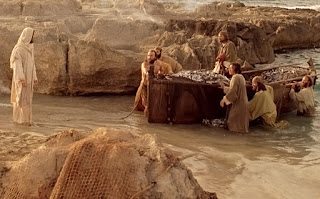 Jesus loved to do miracles with fish. He multiplied five fish to feed 5,000 people (Matt. 14:17-21). Another time, He multiplied a few fish and fed 4,000 people (Matt. 15:34-38). Simon Peter fished all night and caught nothing. Jesus told him to go out and throw out his net again. This time, Peter caught so many fish swam that the boat began to sink (Luke 5:3-7). Later, after His resurrection, Peter went fishing and caught nothing. Jesus stood on the shore and told Peter to throw the net on the right-hand side of the boat. Again, so many fish swam into the net they weren’t able to haul it in.

But perhaps His most unusual “fish miracle” was telling Peter to cast a hook into the sea, and the first fish he caught would have a coin in its mouth, which was the exact amount to pay the temple tax (Matt. 17:24-27). Out of all the fish in the sea, only one had a coin in its mouth. And when Peter threw out his hook, the right fish was at the right place at the right time to be the first fish to bite on his hook.

Jesus did miracles with dead fish and live fish; with many fish and one fish. He could make a school of fish swim into the net without even speaking a word, and could also make one fish hold a coin in its mouth without swallowing it.

But how did the coin get in the fish’s mouth? Did God create the money in its mouth? I don’t think so. It would have made Jesus a counterfeiter because it wouldn’t be the official currency of the government. No, someone in a boat on the Sea of Galilee either threw a coin into the water or accidentally dropped a coin overboard. As it drifted toward the bottom, the fish caught it in its mouth and without swallowing it, kept it there until Peter threw in his hook and caught him.

Since Jesus did all these miracles by controlling fish, just think what He could do if He controlled you. www.kentcrockett.blogspot.com  www.makinglifecount.net

Posted by Kent Crockett at 4:38 PM