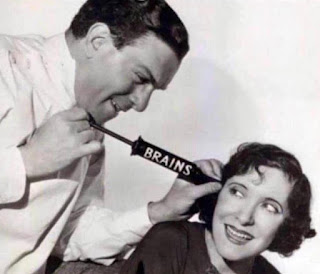 Webster's dictionary defines brainwashed as "to indoctrinate so intensely and thoroughly as to effect a radical transformation of beliefs and mental attitudes."

When we hear the word "brainwashed," we usually think about Adolf Hitler or people trapped in cults. They blindly follow the orders of their domineering leader whose chief aim is to control them.

But what about the not-so-obvious forms of brainwashing? Is it possible the news media and some TV programs try to brainwash their viewers by spinning the facts and attacking those who disagree with their agenda? When a girl in high school is pressured by her peers to compromise her beliefs to be in the popular crowd, isn't that also a form of brainwashing? The common denominator in all brainwashing is pressuring you to conform, and then condemning you if you don't.

Jesus never brainwashed His followers, but He did promise to wash their brains. Only Christ can wash our dirty minds and cleanse our guilty consciences. "How much more will the blood of Christ, who through the eternal Spirit offered Himself without blemish to God, cleanse your conscience…to serve the living God?" (Heb. 9:4). He also promised to put His thoughts in our minds. “For who has known the mind of the Lord, that he should instruct Him? But we have the mind of Christ” (1 Cor. 2:16).

Posted by Kent Crockett at 4:27 PM