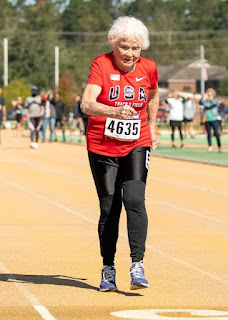 She didn’t beat Bolt’s 9.58-secord record time, but she did run a blistering 102.95 seconds, which earned her the title of the fastest woman in the world for 105-year-olds. Hawkins didn’t break the world record for her age group because she’s the only person to ever run at that age. It’s unlikely her record will be broken because most people won’t live to 105, and even fewer who want to run races.

“I love to run, and I love being an inspiration to others,” she told media after her record-setting performance. “I want to keep running as long as I can.”

Julia Hawkins inspires us to keep running the race of life. The apostle Paul compares the Christian life to a race and tells us, “Run in such a way that you win” (1 Cor. 9:24). Hebrews 12:1 reminds us, “Let us lay aside every weight, and the sin which so easily ensnares us, and let us run with endurance the race that is set before us.”

To “lay aside every weight” means to let go of whatever hinders us from running.

The “race that is set before us” means to follow the plan God has laid out before us.

To “run with endurance” means to keep running, even when you feel discouraged and feel like quitting. Don’t give up. Live faithfully for the Lord until you cross the finish line, and an eternal reward will be waiting for you on the other side.  www.kentcrockett.blogspot.com  www.makinglifecount.net

BIBLE STUDY: The Definition of “the Only Begotten Son”

Posted by Kent Crockett at 8:42 PM