Seeing the Faults in Others but Not in Ourselves 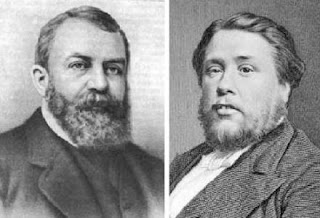 D. L. Moody and Charles Spurgeon were two of the greatest preachers during the nineteenth century. Although Moody (left in pic) had never met Spurgeon (right in pic), he greatly admired the Englishman and arranged to meet him in London. After he traveled across the Atlantic, Moody found Spurgeon’s residence and knocked on the door.
Spurgeon answered with a cigar in his mouth. Moody was aghast. “How could you, a man of God, smoke that?” asked Moody. Spurgeon took the cigar from his mouth, put his finger on Moody’s huge stomach, smiled, and said, “The same way that you, a man of God, could be that fat.”
It’s easy to see the faults in others, but so hard to see them in ourselves. Someone has said, “Faults are like the headlights on your car; those of others seem more glaring than your own.”
Paul writes, “You are without excuse, every man who passes judgment…for you who judge practice the same things” (Rom. 2:1). We tend to see sins in others that we’re familiar with in ourselves. When I’m driving down the street, I’ll notice the cars that are exactly like mine. My eyes aren’t drawn to every car, but only to the ones that are like my own.
In the same way, judgmental people’s eyes are drawn to those same sins in others. They’re actually seeing what’s in their own hearts. Before you form a judgmental opinion about someone, make sure you’re not guilty of the same thing. Quit telling others to dim their lights when your own headlights are blinding them.
www.makinglifecount.net  www.kentcrockett.blogspot.com
****************************************************************************************************
BIBLE STUDY: What is the “third heaven?
PREVIEW Kent’s new book Amazing Stories & Daily Devotionals
CLICK HERE to read 28 devotionals (January 1-28)
Receive these devotionals (free) by email: You can subscribe in the box on the right at www.kentcrockett.blogspot.com (Your email will not be given out. You’ll receive an email when the new devotional is posted)
Making Life Count Ministries
P.O. Box 680174
Prattville, Alabama 36068-0174
www.makinglifecount.net  Twitter: @KentCrockett
www.kentcrockett.blogspot.com
Posted by Kent Crockett at 12:49 PM

Do You Need a Crocodile to Motivate You? 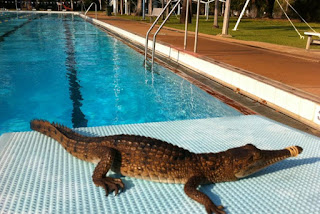 According to a news story out of Australia’s Northern Territory, a swimming coach has an unusual way of motivating his students to swim faster. After the swimmer dives into the pool, the coach throws in a live crocodile. The swimmers’ times have improved dramatically since he started using this new motivational technique.

The coach says he has timed the crocodile and gives the students a head start, knowing it won’t catch anyone. One swimmer said the coach’s way of motivating was “absolutely terrifying.” But no one can deny that the swimmers’ times have improved.

Well, that’s one way to motivate. I’m sure the swimmers can stay motivated as long as a crocodile is chasing them. That will work until you run out of crocodiles—or run out of swimmers.

In 2020, thousands of Americans living in all fifty states received mysterious, unsolicited packages of seeds from China. Many of the seeds have been identified as flowers and vegetables, while others are suspect. If an enemy wanted to create problems in the U.S. environment, what could be more cunning than to slip in invasive, noxious bags of seeds among the good seeds and hope someone plants them?

Someone from Michigan said, “I planted them because I thought they were the strawberry seeds I ordered. They turned black and green mold, so I threw them away.” After a New Mexico woman planted the seeds she said, “Everything that’s in the garden where I planted them are having a hard time and are starting to die.” Agriculture officials warned, "Unsolicited seeds could be invasive and introduce unknown diseases to local plants, harm livestock or threaten our environment. Do not plant seeds from unknown origins."
Jesus told a parable about a man who sowed good seed in his field. “But while men were sleeping, his enemy came and sowed tares also among the wheat, and went away. But when the wheat sprang up and bore grain, then the tares became evident also” (Matt. 13:25-26). When the slaves asked the landowner how the tares got into the field, the landowner said, “An enemy has done this!” (13:29).
The enemy’s goal was to destroy the wheat field. The workers were sleeping, unaware that the enemy was working under the cover of darkness. It wasn’t until later, after the crop grew, that it became obvious that an enemy had planted harmful seeds in the field.
I’m sure many of recipients of the mystery seeds from China believed it was a free gift from a kindhearted soul, unaware that the sender was hoping to get the noxious seeds planted in American soil. Beware when someone sends you with a gift that you hadn’t requested. You might find out later the present isn’t in your best interest.****************************************************************************************************
PREVIEW Kent’s new book Amazing Stories & Daily Devotionals
CLICK HERE to read 28 devotionals (January 1-28)
Receive these devotionals (free) by email: You can subscribe in the box on the right at www.kentcrockett.blogspot.com (Your email will not be given out. You’ll receive an email when the new devotional is posted)
Making Life Count Ministries
P.O. Box 680174
Prattville, Alabama 36068-0174
www.makinglifecount.net  Twitter: @KentCrockett
www.kentcrockett.blogspot.com
Posted by Kent Crockett at 3:01 PM

When God Changes a Name

When Pepper Puryear was a boy, he had a dog named “Sic ‘em.” One evening, a man and his wife were riding horses, along with their daughter who was riding on a pony. Puryear’s dog ran into the street and started barking at the horses. The dog began circling the little girl on the pony as it became more aggressive. Pepper’s father jumped off the porch and tried to call the dog off by yelling, “Sic ‘em! Sic ‘em!”
The man on the horse thought he was urging the dog to attack his daughter! He grabbed a rope off his saddle, twirled it over his head, and lassoed the dog. Then he jumped off his horse and tied the dog’s legs together, just like he was tying up a calf in a rodeo. (The dog probably wished it had kept its mouth shut)
Pepper’s father explained to the man that the dog’s name was Sic ‘em and he wasn’t trying to unleash his dog on the man’s daughter. The cowboy strongly suggested that he change the dog’s name to Spot because Sic ‘em was sending people the wrong message.
Sometimes people, like dogs, need a new name. In the Bible, God would often give people a new name to establish a new identity. He changed Abram’s name to Abraham, which means “father of a multitude” (Gen. 17:5). He changed Abraham’s wife’s name from Sarai to Sarah, meaning “mother of nations” (Gen. 17:15). Jesus changed Simon’s name to Peter, the “rock.” After Saul was converted, he became known as Paul. God wanted them to leave their past behind and pursue a new destiny.
When you receive Jesus Christ into your life, the old things have passed away and new things have come (2 Cor. 5:17). He gives you a new destiny and will give you a new name in heaven (Rev. 2:17). Your heavenly Father will give you a new forever name because He “makes all things new” (Rev. 21:5). You are no longer Sic ‘em. Your new name is “Spotless.”
****************************************************************************************************
PREVIEW Kent’s new book Amazing Stories & Daily Devotionals
CLICK HERE to read 28 devotionals (January 1-28)
Receive these devotionals (free) by email: You can subscribe in the box on the right at www.kentcrockett.blogspot.com (Your email will not be given out. You’ll receive an email when the new devotional is posted)
Making Life Count Ministries
P.O. Box 680174
Prattville, Alabama 36068-0174
www.makinglifecount.net  Twitter: @KentCrockett
www.kentcrockett.blogspot.com
Posted by Kent Crockett at 4:54 PM