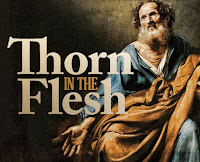 When my daughter was five years old she came to me crying. “Daddy, I’ve got a sticker in my finger and I want you to pull it out.” I grabbed some tweezers and held her finger as I attempted minor surgery. She pulled her hand back and said, “I’ve changed my mind. I want you to leave it in!”
Apostle Paul was tormented by a “thorn in the flesh” and asked God to use heavenly tweezers to remove it. Paul described it as a “messenger of Satan to buffet me” (2 Cor. 12:7). God decided to leave it in.

What was the thorn? It was a “messenger” from Satan. The Greek word is angelos and is also translated angel. It was a fallen angel--a demon assigned by Satan, which caused all Paul’s persecutions and troubles mentioned in 2 Cor. 11:23-26. Because Paul had received many great revelations from God, including a glimpse of heaven, the demon was allowed to “buffet” him to keep him humble. The Lord used hate and rejection by others to keep him from exalting himself. Paul needed to stay humble so God could continue to use him.

Paul’s response to the thorn. Paul doesn’t say when the thorn was given to him, but it may have been shortly after his visit to heaven since he seems to connect them (12:2-7). His first reaction was to get rid of it. After he cried for help three times, Paul had to be wondering if the Lord had heard his request. Then the Lord told him, “My grace is sufficient for you, for power is perfected in weakness” (12:9). God’s power is connected to our dependence on Him. What can we learn from this?

1. God is more interested in your character than your comfort. He will use difficult circumstances and evil people to drive out pride and keep us from exalting ourselves.

2. God may answer your prayers differently than you ask. God did answer Paul’s prayer but not in the way he had asked. The Lord didn’t remove the thorn but gave him the grace to endure it. If Paul hadn’t learned to hear God speak to him, he never would have understood why the Lord allowed it.