The House Built on the Wrong Lot 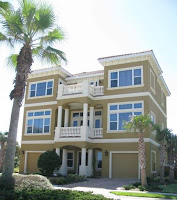 The picture on the left is a 5,300 square-foot dream house in northeast Florida with an ocean view. There’s only one problem. It was built on the wrong lot. “We are in total disbelief, just amazed this could happen,” said Mark Voss, who owns a property management company.

How did it happen? The error can be traced to the first survey in 2013. The land surveying company misplaced the property stakes, and the foundation survey and construction were based on that error. Each day, dozens of subcontractors arrived to work at the wrong lot. A final survey also failed to find the mistake.

“We rely on the surveyor,” said Flagler County’s chief building official. “They are state licensed professionals and we count on them to get it right.”
But they didn’t get it right. The building inspectors didn’t catch the mistake because they were more focused on the construction process itself than the lot survey. The blunder wasn’t discovered until six months after the house was completed.

Many people spend their entire life building on the wrong lot because they put their trust in misguided surveyors. They may be listening to someone who is convinced that God doesn’t exist—so you can live however you want without suffering any consequences. But if you get the lot wrong, everything you build on it will be wrong too. When God’s “final survey” comes, the error will be exposed and it will be too late to fix it.

Jesus said everyone is building on a foundation of sand or rock (Matt. 7.24-27). He said, “Everyone who hears these words of mine and acts of them may be compared to a wise man, who built his house upon the rock” (7:24). Anyone who doesn’t act on His words is building on sand. Jesus is surveyor who tells you the correct place to put down the stakes. But are you doing what He says? Or are you building on the wrong lot? www.kentcrockett.blogspot.com
**********************
Receive these devotionals (free) by email: You can subscribe in the box on the right at www.kentcrockett.blogspot.com (Your email will not be given out. You’ll receive an email when the new devotional is posted)