When You Hit Bottom 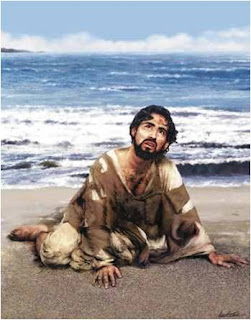 After Jonah was thrown overboard and before he was swallowed by the whale, he "descended to the roots of the mountains" (Jonah 1:6).  In other words, he "hit bottom." Maybe you've hit bottom. You're at the end of your rope and don't know what to do. Jonah tells us three things.

1.When you've hit bottom, cry out to God.  "Then Jonah prayed to the Lord his God from the stomach of the fish and said, 'I called out of my distress to the Lord and He answered me'" (Jonah 2:1-2).  God hears our prayers when we are desperate! When things are going well, we aren't too serious about praying. But when we hit bottom and are more desperate than ever before--that's when our cry comes to God's ear. Jonah said God heard his prayer and answered him.

2.When you've hit bottom, put your hope in God.  Hope means "to expect something good to happen." Here's Jonah's situation. He's in the middle of the Mediterranean Sea. He's inside a whale in complete darkness.  He has no idea where the whale is taking him. Yet, Jonah makes an astounding statement of hope, "Nevertheless, I will look again toward your holy temple." Even though he was in a hopeless situation, he had hope that God would somehow, in some way, get him out of his problem. Does your situation seem hopeless? That's the time when you need to put your hope in God. (See Psalm 42:15)

3.When you've hit bottom, make a commitment to do God's will.  Jonah goes on to say, "But I will sacrifice to you with a voice of thanksgiving. That which I have vowed I will pay" (Jonah 2:9). Commitment is a decision to follow through with something you have started. Apparently Jonah had made some promises to God that he hadn't fulfilled. This is another statement that Jonah had hope of getting out of the whale. He told God that once he got out of the whale's belly, he would fulfill his vows.  Have you fulfilled what you've promised to God?  Jonah would have been much better off if he had obeyed God at the beginning.  And that's true for all of us, so obey Him now and you'll avoid having to go into the whale's belly.

The whale took him back to Israel and vomited him on to dry land (Jonah 2:10). Ironically, Jonah ended up right when he started. But he was a lot wiser now.
http://www.kentcrockett.blogspot.com/
Posted by Kent Crockett at 5:07 PM