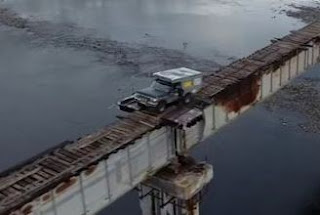 A man and wife were traveling to see some old friends. The last time they went to see them they had to drive over an old, rickety bridge. The wife said, “What are we going to do when we get to the bridge? We can’t drive over it. It’s unsafe.”

The husband said, “But there’s no other way to get across the river. What if it collapses? What if we drown? Who will raise our kids?”

For the next hour they worried about how they would cross the bridge. When they arrived at the river, the old bridge had been torn down and replaced with a new one! They had needlessly tormented themselves about a problem that had already been solved.

When Mary and the other women were walking to the tomb where Jesus had been buried, they worried about how they could move the stone. Like the couple fretting about the rickety bridge, they asked themselves, “Who will roll away the stone for us from the entrance of the tomb?” (Mark 16:3). When they got there, the stone had already been rolled away. All their worrying was in vain because God had already taken care of the problem.