5 Things to Do Before You Kick the Bucket 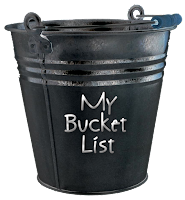 You’ve probably seen the “Before You Die” books like 1000 Places to See Before You Die, or 50 Places to Play Golf Before You Die.  The movie The Bucket List follows the same theme of making a list of fun things to do before you kick the bucket. Last week an extreme sports athlete was killed in Yosemite National Park while attempting a parachute jump from a 3,000-foot cliff. Someone commented, “At least he died doing what he loved.” (What is that supposed to mean? Have fun even if it kills you?)

I’ve created a bucket list that isn’t about having fun before you die, but the best way to leave this world and enter the next life.
#1 Accept Jesus Christ as your Lord and Savior. This is the most important decision you will ever make because it determines your eternal destiny.
#2 Tell your family you love them. I know a woman who said her mother had never told her, “I love you.” When her elderly mother was on her deathbed, she finally said, “I love you.” The daughter broke down sobbing because she finally heard the words she longed to hear her entire life.
#3 Apologize to those you have hurt. You might be surprised how a sincere apology can heal a relationship.
#4 Forgive the person who hurt you.  You’ll stay chained to that person until you forgive. Forgiveness is the key that unlocks the chain and sets you free.
#5 Enjoy every day of your life. Jesus came to give you abundant life. Enjoy the day, the hour, the moment. Once it’s gone you can’t get it back.
Don't put off doing these things because you don't know how much time you have left before you kick the bucket.
www.kentcrockett.blogspot.com  www.makinglifecount.net

The Sermon the Potter Preached

In Jeremiah 18:1-6, God told the prophet Jeremiah to go to the potter’s house. After he got there, the potter preached a sermon to him in a visual way concerning the future of Judah (Israel), but the message applies to us as well. Here are three lessons from the potter’s sermon:

Lesson #1  God is in the process of molding you.  Everyone is in the process of being molded, either by the Holy Spirit or the pressures of this world. Romans 12:2 says, “Don’t let the world squeeze you into its mold.” (Phillips Translation). To be molded by God, we are told to “humble yourselves under the mighty hand of God” (1 Peter 5:6).

Lesson #2  God’s plan for you may not be obvious at first.  Jeremiah 18:3 says the potter was “making something” on the wheel. What he was making wasn’t obvious at first. The potter had a plan in his mind concerning the vessel he wanted to make. Romans 9:20 says, “The thing molded will not say to the potter, ‘Why did you make me like this’ will it?” Put your trust in God, even when the plan is unclear and you don’t understand.

Lesson #3  If you make a mistake, remember that God isn’t finished with you.  “But the vessel that he was making of clay was spoiled in the hand of the potter, so he remade it into another vessel, as it pleased the potter to make” (Jeremiah 18:4). The potter detected a flaw in the clay because a gritty substance resisted his touch. Even though the clay was marred, the potter didn’t throw it away. He made it into another vessel.
Perhaps you’ve rebelled against God and resisted His will for your life. And maybe you’ve suffered the consequences and think life is over. The Lord has not abandoned you and still has a plan for your life. If you will submit to Him, He will complete the work that He wants to do in you. www.kentcrockett.blogspot.com  www.makinglifecount.net

NEW BIBLE STUDY  “Does Jesus Call His Followers to be Sexually Pure?”

The Story Your Face Tells

In the 1800s a couple of prospectors discovered gold and wanted to keep their discovery a secret so others wouldn't find out.  When they went back into town to buy supplies, neither of them said a word to anyone. But as they started back to the mountains, everyone in town was following them with picks and shovels.  Although they hadn’t told anyone about finding gold, their discovery was written all over their faces.

Your face is connected to your heart. Your facial expressions are the newspaper headlines telling the story of what's taking place inside your heart. If you are angry it will show up on your face. If you are depressed, it’s obvious to everyone. But Proverbs 15:13 says, "A joyful heart makes a cheerful face." Joy cannot be suppressed. It will always make a person smile.

What is the story your face is telling today? www.kentcrockett.blogspot.com www.makinglifecount.net

Is Persecution of American Christians Coming?

Could persecution of Christians actually happen in America? We are being mildly persecuted right now through slander and ridicule. Persecution always begins mildly but then it builds in intensity. Hitler began persecuting Jews by ridiculing them through propaganda so he could brainwash the public to hate them. Once he had the majority on his side, the rest was easy.

I’m not sure how or when the heat will be turned up, but it will happen when Christian beliefs are no longer tolerated by our society. Everyone will have the freedom of speech and expression except if you talk about Jesus or what He taught. You will be penalized in some way if you express your beliefs. But remember, Jesus told His followers to expect this. “If they persecuted Me, they will also persecute you” (John 15:20).

How are we to react to persecution? Jesus said, “Do not resist him who is evil, but whoever slaps you on your right cheek, turn to him the other also…But I say to you, love your enemies and pray for those who persecute you” (Matt. 5:39, 44). He’s telling us how to react when we are persecuted. In order to not react wrongly, we must view persecution in a different way. After the apostles were flogged they went on their way “rejoicing that they had been considered worthy to suffer shame for His name” (Acts 5:41).

When real persecution breaks out, here is what could possibly happen:


God promises to greatly reward us when we endure persecution with the right attitude. “Blessed are you when men cast insults at you and persecute you, and say all kinds of evil against you falsely, on account of Me. Rejoice and be glad, for your reward in heaven is great, for so they persecuted the prophets who were before you” (Matt. 5:11-12). Jesus said if we could see our great reward in heaven, we would be jumping for joy!

The Lord will always supply the grace and strength to endure all persecution, so there is no need to fear it.  www.kentcrockett.blogspot.com www.makinglifecount.net