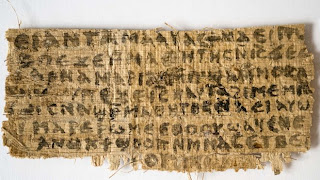 The picture on the left is a recently published fragment of a fourth century Coptic manuscript which supposedly quotes Jesus saying that He had a wife. Of course, the Bible doesn’t teach this, so how do you explain its existence?  People living today write some crazy things, and so did people back then. Just because a fragment of a manuscript was discovered doesn’t make it true.

The first thing that jumps out is how messy it is, with letters written over other letters. The Scriptures were revered as sacred and would have never been written like this. They were carefully copied by scribes and if a mistake was made, the copy was destroyed. This fragment was written by someone who was making up a story about Jesus.

Stephen Emmel, a professor of Coptology at the University of Muenster, questioned whether the document was authentic. "There's something about this fragment in its appearance and also in the grammar of the Coptic that strikes me as being not completely convincing somehow." Alin Suciu, a papyrologist at the University of Hamburg, said, "I would say it's a forgery. The script doesn't look authentic" when compared to other samples of Coptic papyrus script dated to the 4th century.

More than a century after the four Gospels were written, some unknown authors began writing counterfeit gospels, trying to pass them off as Scripture. These counterfeit manuscripts are known as the Gnostic gospels. They are forgeries, fraudulently written using the names of the apostles to give them legitimacy in the early church.

These other writings were not included in the Bible because they didn't past the tests required to be included in the New Testament. The true Scriptures were written near the time of Christ by the apostles and those who were closely associated with them. These false gospels were written 100-300 years later. In addition, these forgeries are often confusing and make little sense, and clearly are not inspired by the Holy Spirit. The "Gospel of Thomas" was not authored by Thomas the disciple but someone else who lived a century later. The ridiculous verses highlighted below clearly explain why the false writings like the Gospel of Thomas were rejected as part of the Bible.
The Gospel of Thomas

11 Jesus said, "The dead are not alive, and the living will not die. During the days when you ate what is dead, you made it come alive. When you are in the light, what will you do? On the day when you were one, you became two. But when you become two, what will you do?"

19 Jesus said, "Congratulations to the one who came into being before coming into being. If you become my disciples and pay attention to my sayings, these stones will serve you.

21 Mary said to Jesus, "What are your disciples like?" He said, "They are like little children living in a field that is not theirs. When the owners of the field come, they will say, 'Give us back our field.' They take off their clothes in front of them in order to give it back to them, and they return their field to them."

33 Jesus said, "What you will hear in your ear, in the other ear proclaim from your rooftops."

The above verses seem to have been written by someone who was trying to make fun of Christianity. Now do you understand why the Gnostic Gospels were not included in the Bible? So the next time you hear of "lost gospels" being discovered, remember that they were only written to deceive and confuse people.