Jesus said, "Follow Me, and I will make you fishers of men" (Matt. 4:19). If you aren't fishing, you aren't following! We fish for men by telling them about Jesus and that He is the only way to heaven. Bait is what attracts fish. If you want to catch fish, you must choose the right bait. Different kinds of fish don't all bite on the same kind of bait. A good fisherman knows how the particular fish thinks that he's trying to catch, and what kind of bait it will like. If you go deep sea fishing for marlins, you won't catch them using worms. They want a large chunk of bait. If you go trout fishing in a mountain stream, you will use a fly on top of the water. Catfish in a lake swim closer to the bottom and they like stink bait. Bluegills swim closer to the top and like worms and crickets. Just as fish are different, so are people. They all need the Lord, but everyone thinks differently. A person won't get saved until they realize they need to be saved. Not everyone is convinced in the same way, so here are some are the different kinds of bait to use, according to the person's need.


After explaining how they can be saved, be sure to lead them in a prayer of salvation. "Dear Jesus, thank you for dying for me on the Cross. Come into my life and save me. I will follow you for the rest of my life. Thank you for saving me. Amen." To hear the entire message on this subject, go to http://www.churchoflivingwater.net/node/23 and click on "Going Fishing." http://www.kentcrockett.blogspot.com/
Posted by Kent Crockett at 11:25 AM 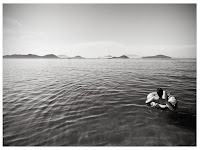 Every summer when I was a kid, our family would travel from Texas to Florida to go to the beach for a week. Every day I would dash into the water and lay on my inflatable raft. One day, I got on my raft and closed my eyes. I enjoyed the gentle waves rocking me like a baby, and wasn't paying attention to the shore.

When I finally looked up, I was shocked to discover that I drifted a long, long way from land. I hadn't noticed that I was being gradually pulled out to sea! Fortunately, I could still see land and hurriedly paddled back to shore.
I drifted away because I wasn't paying attention. Hebrews 2:1 says, "For this reason, we must pay much closer attention to what we have heard, lest we drift away from it."
We drift away from God in the same way. We quit paying attention to Him, and little by little we move away. When we quit spending time with God each day by talking to Him and reading His Word, it's inevitable that we'll drift away from Him. It happens so gradually we don't even realize it. Then something happens and when we finally look up, we see how far away we are.
When I realized I was far from the shore, I didn't get back to the beach by drifting. I had to make an effort to go against the current and paddle my way back. And you must also make an effort to get close to the Lord again. Start talking to Him throughout the day. Meditate on His Word. Get back to doing what you used to do when you were close to Him.
To hear the entire message on this topic, go to:
http://www.churchoflivingwater.net/node/23 and click on
"Drifting from God."
http://www.kentcrockett.blogspot.com/
Posted by Kent Crockett at 12:28 PM

Healing Hurts from the Past

A man carrying a big stone, a sledge hammer, and a suitcase walked into a talent agent's office. He said, "I've got an act everyone would love to see. I place this big stone on my head, and then my assistant swings the sledgehammer as hard as he can and breaks the rock on top of my head."
The agent said, "Wow, that does sound like a great act! I see why you have the stone and sledge hammer, but why are you carrying that suitcase?" The man replied, "Oh, that's what I carry my aspirin in!"
Many people are carrying a suitcase through life because they are in a lot of pain. They've been hurt by someone in the past and haven't gotten over it. King David said, "My heart has been wounded within me" (Ps. 109:22). How do you know if you have a wounded spirit?
Symptom #1: If you are easily offended.
People with a wounded spirit have a very low tolerance for pain. If someone makes a innocent comment, it can trigger the hurtful memory, which causes the person to overreact.
Symptom #2: If you are always talking about how you were hurt.
I've known people who are continually talking about how they were hurt years before. They keep replaying the hurt in their minds, and every time they do, they get hurt one more time.
Symptom #3: If you are overly suspicious of others.
People who are wounded view others with suspicion because they imagine everyone is out to hurt them. This causes them to be distrustful and defensive.
Symptom #4: If it's hard for you to love others.
A person with a toothache has a hard time loving people because all of his attention goes to his hurt. He's so consumed with his own pain that it prevents him from seeing others in need.
How can you be healed? First, you must desperately want to be healed. Jesus asked a man who was lame for 38 years, "Do you wish to get well?" (John 5:6) He wasn't joking. Many people really don't want to get over their hurts.
Second, you must forgive and let go. The reason why some people are still hurting after 15 years isn't because of what the other person did, but because they haven't forgiven them. What is forgiveness? It's releasing the anger out of your heart.
To listen to the entire message, go to
http://www.churchoflivingwater.net/node/23 and click on
"Healing Hurts from the Past."
http://www.kentcrockett.blogspot.com/
Posted by Kent Crockett at 10:37 PM