A group of animals started a training school to increase their abilities. They offered courses in swimming, running, climbing, and flying.

The duck always wanted to run fast like the rabbit, so he signed up for running. He got frustrated because he kept tripping over his big webbed feet.
The rabbit wanted to fly like the hawk but nearly broke his leg when he jumped off the ledge.
The hawk wanted to climb like the squirrel but kept falling because he couldn't hold on to tree with his wings.
The squirrel wanted to swim like the duck but almost drowned because she couldn't kick with her little feet.
They all failed because they were trying to do things that God had not created them to do.
The Lord has things for you to do in this life, and He will give you the ability to fulfill your calling. When you are effectively operating in your spiritual gift, it will become "supernaturally natural" for you, like a duck swimming or squirrel climbing. But if you are trying to do something that God has not called or gifted you to do, you will feel as awkward as a rabbit trying to fly!
To hear the entire message on this subject, go to
http://www.churchoflivingwater.net/node/23 and click on
"Discovering Your Spiritual Gift"
Keep looking up!
Kent
Posted by Kent Crockett at 6:41 PM

A man and wife pulled into a full service gas station to refuel their car. As the tank was being filled, the station attendant washed the windshield. When he finished, the driver stuck his head out the window and said, "It's still dirty. Wash it again."

"Yes, sir," the attendant replied. After he cleaned it a second time, the driver said, "Don't you know how to wash a windshield? It's still filthy. Now do it again!"
The attendant scrubbed the windshield a third time, carefully looking for any messy spots he might have missed. By now the driver was fuming. "I can't believe you are so incompetent that you can't even do a simple job like cleaning a windshield! I'm going to report you to your boss!"
Just then, his wife reached over and removed his glasses. She wiped them clean with a tissue, then put them back on his face. And it was amazing how clean the windshield was!
A person with a critical spirit is a speck inspector. Jesus said, "And why do you look at the speck that is in your brother's eye, but do not notice the log that is in your own?" (Matt. 7:2) A critical person always finds things wrong with others because he's looking through the dirty glasses on his heart. God wants us to remove that mean-spirited attitude that picks others apart. But how?
By increasing our love for others. When our compassion decreases, our criticisms will increase. But the reverse is also true. When our compassion increases, our criticisms will decrease.
To hear the entire message on this subject, go to
http://www.churchoflivingwater.net/node/23 and click on
"Destructive Attitudes pt 5: Criticism"
Keep looking through a clean heart!
Kent
Posted by Kent Crockett at 8:27 PM 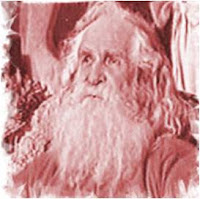 In 1 Kings 19:1-4, the prophet Elijah received a message that King Ahab's wife Jezebel would kill him within 24 hours. Immediately he fled to the wilderness and asked God to take his life. By shifting all of his attention to his problem, Elijah's perspective was thrown totally out of whack. He got spiritual amnesia and forgot about all the miracles that the Lord had done through him, including raising a boy from the dead and calling down fire from heaven. In Elijah's mind, Jezebel now looked bigger than God!

During the Civil War, General Robert E. Lee had a shortage of soldiers and knew his army would be devastated if the Union forces discovered this weakness. Since he couldn't increase his number of soldiers, he decided to make his army larger than it actually was. He loaded his troops on trains and transported them to different places. At every train station, the same Confederate soldiers were unloaded from the trains. The Union spies believed that thousands of new troops were being added to the Rebel army. General Lee didn't make his army any larger, but was just using a psychological tactic to deceive the Union army. And it worked.
In the same way, Satan tries to make our problems appear larger than they really are. He puts them under a microscope and magnifies them, so that we can't see anything else. He does this so that we'll lose perspective and leave God out of the picture. And like Elijah, we quickly forget about God's faithfulness and all the good things He has done for us.
What makes you lose your perspective? When your favorite team loses? (I know that this is hard to believe, but it's only a game!) Do you lose your perspective by worrying about the future? Just remember that God exists in the future, is waiting for you there, and has good plans for His children.
So what happened to Elijah? Jezebel didn't kill him, so his fears were simply a lie to torment him. In fact, it was Jezebel and not Elijah who died the violent death (2 Kings 9:30-37). It's ironic that Elijah, who was afraid of being killed, never died. He was caught up into heaven alive (2 Kings 2:1, 9-11). If Elijah would have just remembered God's faithfulness in the past, and trusted in God's good plans for the future, he never would have lost his perspective.
To hear the entire message on this, go to
http://www.churchoflivingwater.net/node/23 and click on
"The Elijah Complex."
Keep looking up!
Kent
Posted by Kent Crockett at 4:44 PM

In the 1800's, a ship in the Atlantic encountered a bad storm. The crew heard crashing sounds below and hurried down to discover that a cannon had broken loose. As the ship went up and down over the waves, the cannon was rolling back and forth, ramming into the sides of the ship. The sailors were able to secure the cannon and get it under control.

It's not the storms on the outside that destroys us, but the storms on the inside. When our anger gets out of control, it becomes like the loose cannon that tears us up inside. If we don't get it under control, it will sink us. So how can we manage our anger?
1.We must find the cause of our anger. God asked Cain, "Why are you angry?" (Gen. 4:6) A mechanic has to figure out what's causing the car problem before he can fix it. You must find out what's causing you to be mad by looking deep within. The problem may not be with the other guy, but your unrealistic expectations of others.
2.We must choose to respond in the right way. God then told Cain, "If you do what is right, will you not be accepted?" (Gen 4:7). We can choose to respond in the right way or the wrong way. Cain could have responded correctly, but he ignored God's advice and murdered his brother Abel instead.
3.We must divorce ourselves from anger. Eph. 4:31 says, "Let all bitterness and wrath and anger. . . be put away from you, along with all malice." Maybe if more people divorced themselves from their anger, there would be less divorces. Paul tells us to separate ourselves from "all" wrath, anger, and malice. By cooperating with the Holy Spirit you can let go of your hostility, which is robbing you of your happiness.
To hear the entire message on managing your anger, go to
http://www.churchoflivingwater.net/node/23 and click on
"Anger Management."
Keep looking up,
Kent
Posted by Kent Crockett at 10:33 PM